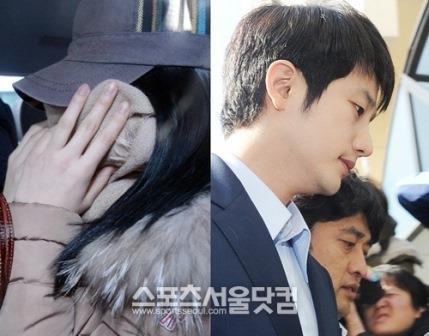 The representative said: ” After collecting all the evidence of the parties involved, the video back, the message Kakao Talk and records from the Forensic Institute, we decided to send the records to the prosecution and prosecution not detained  Park Shi Hoo  as acts of sexual abuse and violence. “

“The message Kakao Talk which side  Park Shi Hoo  provided to the testament to her at 31/1 last not be said to be important for this case compared to the other evidence. We also confirmed that there is no evidence to suggest that this is the case settled, instigators. incident will be made court and the defendant will be directed to special investigation in the future. “

Currently, the police custody will not  Park Shi Hoo to serve the process of investigating whether he is accused. Trial  Park Shi Hoo  will take place after full recognition elements from the police records.

The police Central Seoul conclusion, the sexual relationship between A and Park Shi Hoo signs of violence, control, without the willingness of A . This conclusion was based on the evidence collected, the plus tripartite interrogation between A , Park Shi Hoo and matchmaker K . The results of the lie is also considered a reference to the police base.

Police Central Seoul told Sports Seoul page: “In the past lie, the A ‘s answer is “Yes.”

Park Shi Hoo and K the majority of them being the “Sai”. We can not reveal the questions used to interrogate according to the Institute of Forensic Medicine. This is just our base reference, not used as evidence in court. “

On 15/2, South Korean public opinion was shocked when posting press  Park Shi Hoo was a 22-year-old girl accused guilty rape . Until the conclusion of the police, information online quite mixed. The public are anxious wait on Park Shi Hoo and other stakeholders before the courts confront.