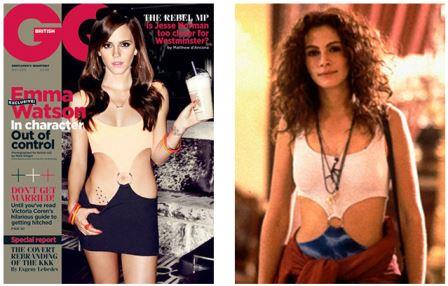 The actress was released to success thanks to the role of Hermione, but it seems she has finally managed to get rid of the image of brave sorceress.

Appears very sexy on the cover of GQ, with a tight dress and a sexy neckline. The actress is dressed as the character from The Ring Bling Nikki, the film in which she has worked under Sofia Coppola.

Emma also looks fake tattoos on the wrist and abdomen.

In the film plays the leader of a gang of thieves who enter homes of numerous stars and seize their belongings. It is based on a true story, in which the victims were Paris Hilton, Orlando Bloom and Lindsay Lohan.