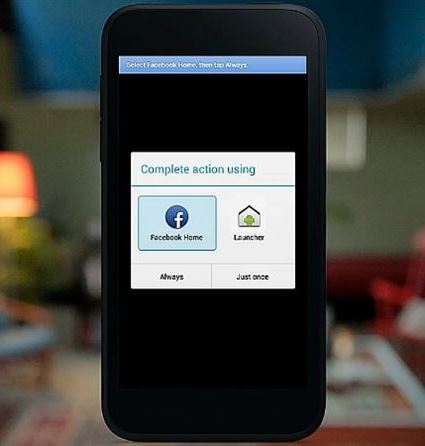 Facebook Home: A Facebook “Hidden” with Revolutionary interface Android:  Mobile devices are key to Facebook. Therefore, Facebook founded by Mark Zuckerberg has presented Thursday from Menlo Park, California (U.S.) a fundamental part of its growth strategy: a “layer” that converts Android smartphones with the operating system a cell dominated by Facebook (Facebook Home).

According to an IDC study based on interviews with 7,446 iPhone and Android users in the U.S., the mobile user query Facebook an average of 14 times a day. In addition, 79 percent of users of smartphones check their phone 15 minutes after getting out of bed, though rush hour traffic occurs at night.

In fact, 20 percent of the time we spend on your phone, we are on Facebook as Mark Zuckerberg revealed at the presentation held on Thursday in the United States. This figure rises to 25 percent if we also Instagram, as the founder of the most popular social network in the world.

Facebook knows it’s part of our life, and have more users in mobile web (618 of its 1,060 million, according to official data January) and it wants to explode. So the company introduced a layer of ‘software’ that hides the Google operating system and applications to offer a new interface that interact with Facebook from power on the phone without having to run the application. The company has called home, home.

How will that Facebook? How to “clog” Android? Home reach Google Play as an application and when we install, the system will ask if you want to perform the action with Facebook Home or the ‘Launcher’ operating system. This will authorize the application to “take control” interface.

Once installed Home, Facebook “dominate” the phone. We will see pictures in full screen and can move fluidly from one content to another or chatting with a completely different interface that we have used so far the social network. It’s all image and above it faces moving icons representing users or conversations. Admittedly, Facebook has achieved a very smooth navigation.

FACEBOOK, LOOK LOOK WHERE: With Home, everything will be Facebook. It will be, at least, every time we get on the phone … Because it will be the first thing you see. No doubt with that, Facebook is to continue increasing the use of their services.

But if “everything” on our Facebook phone becomes with Home, does that mean that the other apps disappear? No, of course not. There will be a button from the Home to which we can access a menu where they will all, similar to the current application menu Android. The intention of social networking is that our current home screen full of icons disappear and plant his flag there.

Regardless of whether Facebook hoard the experience with the ‘smartphone’, an associated problem that could bring Home is data consumption. The layer-like many applications, in fact, is designed to continue downloading data and information when the phone is idle. You can turn off, but then what sense would it Home? Will have to see how it shoots its use consumption data.

Mark Zuckerberg has opined that “this is the best version of Facebook that are” out of all those available for any device. Needless to say, it is impossible Home IOS closed operating system that does not allow allowing Android. So we will wait to see the strategy for the social network in the Apple ecosystem.

As of April 12, Facebook Home can be downloaded for free on Google Play in the U.S. and will soon be available in other countries. Home supports the following devices: HTC One X, HTC One X +, Samsung GALAXY S III and Samsung GALAXY Note II. Home also be compatible with HTC One and Samsung Galaxy S4 and other devices in the coming months.

How to Supercharge Your Android Phone Without Root