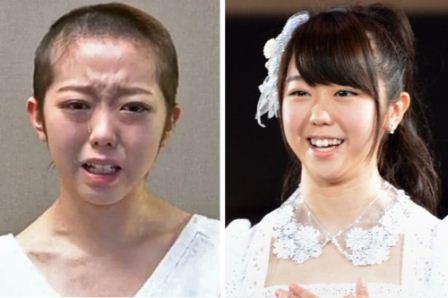 Minami was reprimanded by AKB48s managers after the story leaked – prompting her bizarre video message.

“It is not known Shirahama still the name, drama last year” “midnight drama in the fall. Appeared” BLUES bastard “and” GTO “He was the leading role in” sugarless (desk entertainment)

Alan Shirahama was found to be announced as “a good friend” about the relationship between (AKB48) Minegishi Minami staying devoted to coverage has been made.

We reported that the Minegishi Minami was staying at the house of a sub-storm in the Setagaya in Shirahama (Issue Release January 31, 2013) Bunshun,

Minegishi Minami fuss about this, she released a comment on the videos on youtube channel of AKB48 “I have done thing all wrong” and that there was no mention adoration. Appearance and clean-shaven head, I apologized in tears.

Because of my review in the weekly magazine released today, this time, we apologize that fans and members, Mr. staff, family, etc. We apologize for the worry.
I think it was very hasty action without conscious spite of the position we must take action to be a positive role model for younger as the first phase.
In the head is still pure white, what do I do …
I did not know what can be, I’ve decided to become a priest without consulting anyone can not be there even after watching a weekly magazine.
The very first thing I thought, was that I do not want to stop AKB48 By this, I have not think of this time can be allowed.
Leaving’ve spent youth, members favorite, the AKB48 fan warm to me that there is now unthinkable.
It may be wishful thinking, if you can, I want to be Minegishi Minami of AKB48 yet. That is what I was wrong all this time. I’m terribly sorry.
For the future we will be left to the judgment of the teacher, such as Akimoto.
We have not arrived yet organized, we have to tell you that I think about it now.

Mr. Shirahama storm sub-office will be devoted only to comment on the report staying, on Twitter itself does not seem to comment (as of early morning February 1) so far.