Destiny’s Child Re-united on Sunday night During Beyonce half-Time Show At Super Bowl 2013 with Kelly Rowland and Michelle Williams:  The singer Beyonce wore in the show which took place at halftime of the Super Bowl and delighted the audience bringing her old band-mates the Destiny’s Child in New Orleans. 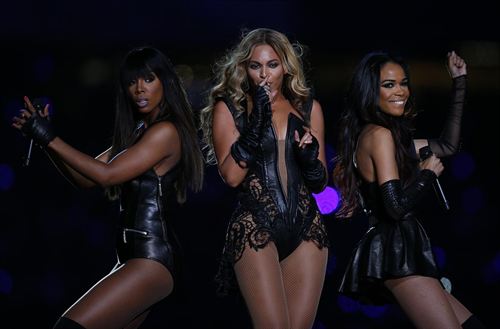 Beyonce, wearing a suggestive black leather jacket and a miniskirt to game, was surrounded by bursts of fire, smoke and silhouettes in her performance on Sunday at the Super-dome Mercedes-Benz.

More than 100 million viewers tuned into the League game of American football between the 49ers in San Francisco and the Baltimore Ravens, who won the Baltimore.

The singer addressed the public on several occasions during their first songs, ‘ Love on Top’, ‘ Crazy in Love’, ‘End of Time’ and ‘Baby Boy’, to make it clear that shw was singing live and avoid controversy as that entailed her interpretation in playback during the inauguration of Barack Obama.

A few days ago the artist admitted that not sang live when she played the national anthem at the opening ceremony of the second term of the President of the United States.

The controversy threatened to derail the careful return of the pop singer after giving birth to her first child with her husband, rapper Jay-Z, in January 2012. Beyonce also released a documentary directed by it, ‘ Life is But a Dream‘, on the HBO channel on February 16.

During the show on Sunday at halftime of the Super Bowl, the 31 year old American stepped on strong and shook their hips and torso while projecting a video of herself dancing to give the feeling of choreographed routine.

It was the first performance in public of the trio since 2006. Dressed in black leather costumes designed by Rubin Singer, sang three songs, including the success of Beyonce ‘ Single Ladies (Put a Ring on It)’.

The last month, the Group launched ‘Nuclear’, her first song in a decade. Beyonce ended her performance with ‘Halo’ of their 2008 album ‘ I Am… Sasha Fierce’.

Before Beyonce had performed Alicia Keys and Jennifer Hudson, who played ‘ America the Beautiful’ with the chorus of the school Sandy Hook, where the mass shooting took place in December in Newtown, Connecticut. For her part, Keys sang the national anthem with a piano located in the center of the stage… and did it live.

Last year, the Super Bowl attracted 111.3 million viewers in the United States, the largest audience for a television program in the North American country.

Nicholas Cage Is A Vampire Photo From 1870