T-ara Fan is Angry Throw Eggs at CCM Building: Some angry fans who have been using their own T-Ara-related problems by throwing the egg into the office building Core Contents Media (CCM) to express their anger and frustration. 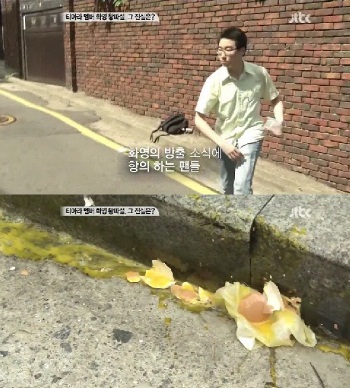 This episode shows the reaction of fans juag, featuring video by the fans who threw eggs at the CCM office building.

Fans who threw the egg was 3-4 on the road near the building that greets the camera with a red face because he could not relieve his anger. Fans commented, “Kim Kwang Soo one of their set. T-Ara member adds to 7 people is the problem. ”

Other fans are hoping they can resolve problems quickly, “I do not like T-Ara verbally abused like this.”

Meanwhile, Kim Kwang Soo has issued an apology for the controversial T-Ara by his own hand.

Having Children out of Wedlock Chan Chun Sing Said