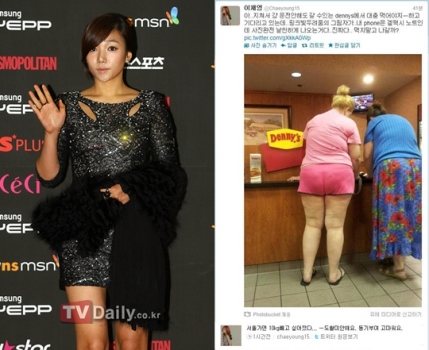 She wrote on her twitter account: “I went to grab a meal at the nearby Denny’s, but while waiting at the restaurant, I was met with a pink light of fear. They came out looking a lot skinnier in this photo. This is for real. Should I not eat and just leave?”

Lee Chae Young continued, “This makes me want to lose 10 kg as soon as I arrive in Seoul. I’m sorry for secretly taking the photo without permission, but thank you for motivating me,” adding onto the issue.

Lee Chae Young photos and articles posted on Twitter soon deleted, but netizens capture the Lee Chae Young Twitter post and posted as an online community bulletin board for criticism of the thoughtless behavior.

Lee, Chae netizens facing Twitter, writing a “to do so, offer your talent did not know anything rash,”

“Lee, Chae was a surprise to the thoughtless actions. The hero of the picture, if you saw this post how you think they were hurt,” “exposed to public this ill-advised to refrain from acting as an actor like “reacted.

They commented, “I never knew she was an actress who would behave so rashly“, “I’m shocked. Just imagine how hurt those two women would be if they happened to see that photo“, “How embarrassing“, “She should have just kept her thoughts to herself“, and more.

Lee Chae Young has since apologized for her thoughtless remarks saying, “I’m sorry. My heart feels heavy knowing that I have disappointed many for my careless remark. I will take the time to reflect on my actions. I sincerely apologize.”