Twitter Launches A Gauge of Popularity for US Elections: Twitter takes part in the American election campaign, measuring the outcry that related to the candidates show their ‘tweets’. The study was done through an index that is generated by accounting for user comments.

Several days of an amazing stream of ‘tweets’ related to the U.S. elections have attracted the attention of experts of the network of micro-blogging, which decided to establish a public index of popularity of presidential candidates. 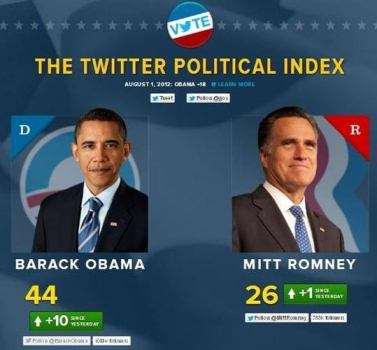 The index shows the faces of the two candidates with scores on their results, and a comparative figure below in red or green, depending positively or negatively have changed from the previous day.

The scores are derived from the number of ‘tweets’ mentioning the names of the candidates. The system analyzes information from 400 million comments on other topics that records Twitter every day, as they progress on his blog.

So, on Thursday Barack Obama has a score of 44, 10 points above yesterday’s results, while Romney has a score of 26 with a positive point about yesterday. The results of candidates is updated every day at 20:00 hours.

This is more a gauge that lets you see the popularity of the candidates, which at this time close to the elections of November 6, explode across the country. One of the classic popularity ratings highlights is the company that publishes the Gallup statistics, and collecting samples throughout the country in the opinion of citizens.

Otherwise, this time online, is Real Clear Politics, which also produces a daily report on the popularity of candidates. Today the latter index points to Obama as the winner with two points of difference.

In this sense, Twitter has made clear that its index is a tool designed to destroy the popular classic surveys and barometers made by campaign managers and other means of communication, but “reinforces”.

For their studies, Twitter has the support of The Mellman Group and Opinion Research North Star, two companies renowned statistician.

On the other hand, for the micro-blogging network is also a result of its popularity to discuss social issues. “Our team of government and politics has been used to study the state of the Union, a debate FOX News, Super Tuesday, gay marriage and other issues of an election year,” say on his blog.

They point out the benefits of this popular explosion to improve the design of the website, “this explosive growth has led the conversation to Twitter as a platform for public debate,” explained in his blog.

The main advantage of the rate of Twitter is that users feel more confident discussing their views on a social network, rather than the thousands of surveys that are conducted every day in the United States to predict election results.

However, you could also say that although the social network has 500 million registered accounts as published a few days ago, it is possible that the index now clearly points to Obama winning with a score of 44 points, is a reflection of what Twitter users of any nationality feel and not what the groundswell of North America says.