Lee Kuan Yew Passed Away? This is a hoax about Lee Kuan Yew Death. There is no official announcement from the PMO.  I can confirm that Lee Kuan Yew is not dead. He is still alive but sick.

Singapore Twitter sphere has spread a rumor that The Founder f PAP Party Mr Lee Kuan Yew has died. However this information cannot be confirmed as the state news have neither confirm nor deny this. 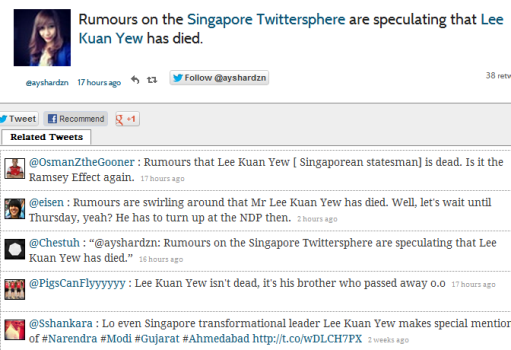 Lee Kuan Yew is 88 year old and he is no doubt suffering from a neurological disease. His younger brother Freddie Lee died earlier in 29 June this year at aged 85, while his other brother Dennis Lee died at 77 from kidney cancer.

Lee Kuan Yew’s wife died in her sleep in 2 Oct 2010. Lee’s father lived till 94. The world’s oldest politician in power has never been contested in his electoral ward ever since the GRC system was introduced.

If it is true then lets see if Lee Kuan Yew shows this Thursday on the National Day Parade.