Kinesio Tape Olympics 2012: The Kinesio tape, developed by a Japanese doctor over 30 years ago, is worn by just about every athlete at the London Games.

The Kinesio tape was devised by Japanese chiropractor Kenzo Kase. He found that application of the tape following treatment reduced his patient’s pain. The tape is used by both physiotherapists and osteopaths alike as an adjunct to treatment, so that sports people and general public could resume their activities quicker. 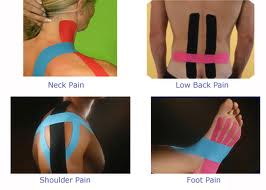 The tape became popular after US beach volleyball athlete Kerri Walsh competed at the Beijing Games with lines of black tape on her shoulder. It was no coincidence, Kinesio donated 50,000 rolls to 58 different countries at the 2008 Games.

More than 4,000 people in Britain are now trained in the art of Kinesio taping and many of them look after some of the country’s top sportspersons.

Kinesio Tape London Olympics 2012 Rules: Main aim of the tape, which athletes have been sporting at different body parts, is to support muscles and joints and that too without disturbing the blood flow of the body. It is not a novel technique and has been in use since 1979, and is the brain child of Kenzo Kase.

Experts have compared the use of the tape and have reached at a conclusion that the tape was used in Beijing Olympics, but not to the extent of London Olympics 2012. Though people known to the matter are aware of the tape, they are not amazed onlookers.