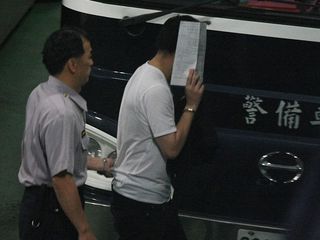 Prosecutors said Justin Lee had been hiding in Chen’s apartment in Changhua and Chen Mei-lan, who admitted to having helped Lee hide during the 23-day manhunt for the suspect, was released after posting a NT$120,000 bond.

The Taipei District Court ordered Lee, 27, to be detained but still allowed him to have visitors, rejecting prosecutors’ request that the suspect be held incommunicado. The High Court later decided to hold Lee incommunicado,

But the socialite claimed that he had consensual sex with the women and that he did not secretly film the acts or circulate sexual photographs or videos.
Justin Lee, a socialite wanted for allegedly drugging and raping several celebrities and other women and filming the acts, was taken into custody Friday.

The statement was considered non-plausible by prosecutors. The Taipei District Court early Friday approved a petition by prosecutors to keep Lee in custody.

He was, however, released by prosecutors after questioning on that occasion because of a lack of substantial evidence.

As more accusations emerged against him this year, prosecutors placed him on a wanted list Aug. 1 after he repeatedly failed to show up for questioning.

Police and investigators reportedly discovered scores of explicit videos involving more than 40 women, on a computer seized at Justin Lee’s home. Some photos believed to have been captured from the videos were later found posted on the Internet.