Apple Victorious In Apple Vs Samsung Case US Jury says Samsung ripped off iPhone, to pay $1 Billion Damages Apple Inc scored a sweeping legal victory over Samsung on Friday as a US jury found the Korean company had copied critical features of the hugely popular iPhone and iPad and awarded the US company $1.049 billion in damages. 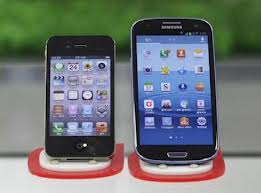 The verdict  which came much sooner than expected  could lead to an outright ban on sales of key Samsung products and will likely solidify Apple’s dominance of the exploding mobile computing market.

A number of companies that sell smartphones based on Google’s Android operating system may now face further legal challenges from Apple, a company that is already among the largest and most profitable in business history.

Shares in Apple, which just this week became the biggest company by market value in history, climbed almost 2 percent to a record high of $675 in after-hours trade.

Brian Love, a Santa Clara law school professor, described it as a crushing victory for Apple: “This is the best-case scenario Apple could have hoped for.”

The jury deliberated for less than three days before delivering the verdict on seven Apple patent claims and five Samsung patent claims — suggesting that the nine-person panel had little difficulty in concluding that Samsung had copied the iPhone and the iPad.

Billions of dollars in future sales hang in the balance.

Apple’s charges that Samsung copied its designs and features are widely viewed as an attack on Google Inc and its Android software, which drives Samsung’s devices and has become the most-used mobile software.

Apple and Samsung, two companies that sell more than half the world’s smartphones and tablets, have locked legal horns in several countries this year.

Earlier on Friday, a South Korean court found that both companies shared blame, ordering Samsung to stop selling 10 products including its Galaxy S II phone and banning Apple from selling four different products, including its iPhone 4.

But the trial on Apple’s home turf — the world’s largest and most influential technology market — is considered the most important.

The fight began last year when Apple sued Samsung in multiple countries, accusing the South Korean company of slavishly copying the iPhone and iPad. Samsung countersued. Apple had sought more than $2.5 billion in damages from Samsung, which has disputed that figure.

The companies are rivals, but also have a $5 billion-plus supply relationship. Apple is Samsung’s biggest customer for microprocessors and other parts central to Apple’s devices.

A NEAR CLEAN SWEEP?

The US jury spent most of August in a packed federal courtroom in San Jose — just miles from Apple’s headquarters in Cupertino — listening to testimony, examining evidence and watching lawyers from both sides joust about seven Apple patents, five Samsung patents, and damage claims.

Jurors received 100 pages of legal instructions from US District Judge Lucy Koh on August 21 prior to hearing the closing arguments from attorneys.

Lawyers from both tech giants used their 25 hours each of trial time to present internal emails, draw testimony from designers and experts, and put on product demonstrations and mockups to convince the jury.

At times, their questions drew testimony that offered glimpses behind the corporate facade, such as the margins on the iPhone and Samsung’s sales figures in the United States.

From the beginning, Apple’s tactic was to present what it thought was chronological evidence of Samsung copying its phone.

Juxtaposing pictures of phones from both companies and internal Samsung emails that specifically analyzed the features of the iPhone, Apple’s attorneys accused Samsung of taking shortcuts after realizing it could not keep up.

Samsung’s attorneys, on the other hand, maintained Apple had no sole right to geometric designs such as rectangles with rounded corners. They called Apple’s damage claim “ridiculous” and urged the jury to consider that a verdict in favor of Apple could stifle competition and reduce choices for consumers.

The California trial has produced its share of drama and heated moments. Lawyers routinely bickered over legal matters in the jury’s absence, filed rafts of paperwork to thwart each other’s courtroom strategy, and sometimes even resorted to public relations tactics to make their views known. via First Post

Want Some HTC Sense 6 Apps on Your Android?