EvasiOn Jailbreak Is Available Now For  iPhone 5 And 6 iOS Devices: The Evad3rs Team has published EvasiOn, a new ‘Jailbreak’ compatible with all iOS devices, including the iPhone 5 as well as any other iOS device capable of running iOS 6.0 or 6.1, with the exception of the Apple TV (3rd generation). 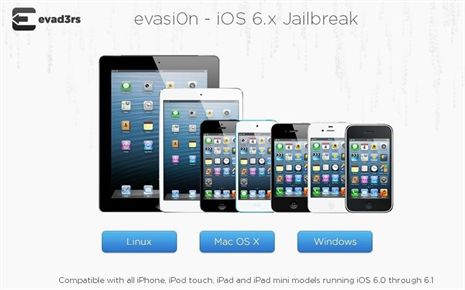 EvasiOn is cross-platform and allows users to eliminate the limitations and protections of software imposed by Apple on their computers.

The history of iOS has been linked to the search for systems to infringe its protections. Apple has been introducing new forms of protection for your system that have failed to overcome the work of groups of programmers. Known as ‘jailbreak’, each version of iOS has seen before or later appeared a new system for its violation.

iOS 6 and 6.1, the latest versions of Apple’s system already has a ‘jailbreak’, called EvasiOn by their authors, the Evad3rs group. In this case EvasiOn highlights by removing restrictions on the latest versions of iOS software and be the first that allows its application in the iPhone 5, which had such versions.

On the Evad3rs website have posted the information necessary for the use of the ‘jailbreak’ terminals of Apple. As reported by the Group of programmers, EvasiOn is compatible with all iOS devices that have the latest versions.

Apparently, installation of the ‘jailbreak’ is a matter of minutes and the procedure has been simplified to facilitate its implementation.