Facebook after death, Most people can’t live without Facebook — but what happens to your Facebook page when you are no longer living? New Hampshire and other states are trying to figure that out. 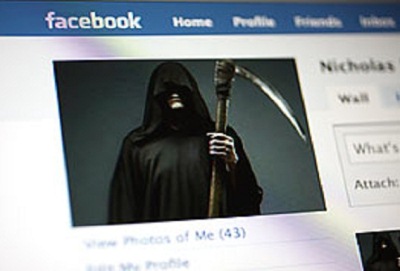 State Rep. Peter Sullivan introduced legislation that will allow estate executors to control Facebook after death. In fact, not only is Facebook included, but also Twitter and other email and social media accounts.

Sullivan said:
“This would give the families a sense of closure, a sense of peace. It would help prevent this form of bullying that continues even after someone dies and nobody is really harmed by it. The family wasn’t able to do anything; they didn’t have access to her account … They couldn’t go in and delete those comments, and they couldn’t take the page down completely.”

“This would give the families a sense of closure, a sense of peace. It would help prevent this form of bullying that continues even after someone dies and nobody is really harmed by it.”

In an interview with WMUR, Sullivan tells the story of a young Canadian girl who committed suicide because of bullying. After she died the taunting continued on her Facebook page.

“The family wasn’t able to do anything; they didn’t have access to her account.” Sullivan said. “They couldn’t go in and delete those comments, and they couldn’t take the page down completely.”

State Rep. Peter Sullivan has introduced legislation to allow the executor of an estate control over the social networking pages of the dead. Last week, the New Hampshire House of Representatives voted 222-128 to give Sullivan more time to write an amendment that begins a study of the issue.

Five other states, including Oklahoma, Idaho, Rhode Island, Indiana and Connecticut, have established legislation regulating one’s digital presence after death. Rhode Island and Connecticut were first, but their bills were limited in scope to email accounts, excluding social networking sites.

According to opponents of Sullivan’s bill, contracts and provisions between the social media user and the site already lay out what happens to the page once the user passes. Opponents say Sullivan’s bill is unenforceable and incomplete. Some also say the issue would be better suited for federal law.

Ryan Kiesel, then a state legislator from Oklahoma, sponsored a similar bill in 2010 called the Digital Property Management After Death law. Though he supports states’ efforts to bring light to this issue, saying that it is a good way to get the conversation started, he also believes that this is a case that should eventually taken up by the federal government.

Keisel told ABC News. “The federal government should pass uniform laws to govern all digital assets because it is quite difficult for an estate to have to navigate endless numbers of digital policies postmortem.”

Kiesel, who now works as a civil rights activist, compared one’s digital legacy to the distribution of someone’s tangible assets after death.

“In Oklahoma, if you are administrator of the estate of a deceased person’s house and you find a box under their bed, you are well within your right to see what’s inside that box and if property is worth distributing, you should distribute it accordingly.” Kiesel told ABC News that the same idea goes for digital legacy.

Today marks the ninth Anniversary of the launch of Facebook, which currently has over 1 billion active users. That number, which has grown from just a million users in 2004, suggests there must be an enormous number of Facebook pages that must currently be occupied by deceased people.

Facebook has not completely ignored the growing number of deceased users. The site has created a function allowing Facebook pages to become memorials after they have died.

“Please use this form to request the memorialization of a deceased person’s account,” the site reads. “We extend our condolences and appreciate your patience and understanding throughout this process.”

Memorialization of a Facebook page, however, can only be done via online request. And the terms of service for Facebook’s say that it will not issue login and password information to family members of the deceased. The requestor must contact Facebook and request that the profile is taken down or memorialized.

New Laws for Facebook After Death: Facebook, Twitter, Gmail, Paypal, investment accounts, frequent flier miles, LexisNexis access — consumers today take advantage of a wealth of online services across a broad swath of industries. But what happens to all those accounts, filled with photos, memories, insights and money, after a person dies?

The issue is doubly important for services like Paypal or online bank accounts that contain actual cash assets, but families can gain real or emotional value from the non-monied contents of Facebook or email accounts as well. How do states and service providers decide who can access what, short of a court order for every single circumstance that an heir might have a valid reason to log into Aunt Myrtle’s Twitter account?

In an attempt to clear up conflict and confusion, the Uniform Law Commission, a group that recommends standardized laws for states, is planning to draft model legislation to address social media accounts and digital assets.

“The idea is to get ahead of the states that are starting to put in place laws that deal with third party access to accounts and email saved in the cloud,” says ULC Senior Legislative Counsel and Legal Counsel Eric Fish. “We’re looking at how to bring in management of virtual assets, how to copy and delete those assets and how to terminate or otherwise hand over accounts of somebody that’s deceased.”

“Our goal is to give states a manageable and understandable set of rules that can be enacted everywhere,” the attorney says. If most or all states have the same or similar laws on virtual asset management, it can help companies better craft their terms of service to comply with those laws, and help prevent conflicts that end up before a court, especially as we store more and more personal information and assets on the cloud.

“In a few years, there will be more litigation,” Fish notes. “It’s important to have a statutory solution now before it gets out of hand.”

The committee to draft the legislation will start meeting this month and expects to have something finished and approved for states to consider by July 2014.

Patchwork Solutions:
In the meantime, a patchwork of state laws and company policies govern who can access people’s accounts after they die. In many cases posthumous accounts are governed under the 1986 Electronic Communications Privacy Act, which blocks disclosure of communications without a court order. Needless to say, technology and how we use it has changed since 1986. Since then, only five states have passed specific laws to deal with digital assets and accounts.

Connecticut was the first, in 2005, with a statute that governs how beneficiaries can gain access to their deceased relatives’ email accounts. Idaho, Indiana, Oklahoma and Rhode Island have since passed their own laws, covering varying degrees of specificity. Oregon, Nebraska and at least four other states are also considering laws on how to turn over online accounts to a person’s heirs.

Different services also have their own rules about how to handle accounts of dead people. Facebook will turn a page into a memorial site if they are presented with proof of death, but will not give anyone access to the account unless compelled by law. Some email services will send CDs with data from an account to next of kin, but actual passwords and full access are much more difficult to obtain. In 2005, Yahoo mail turned over an account password to the family of a marine killed in battle, but only after they were ordered to do so by a Michigan court.

For now, people should include account passwords, instructions on how to handle them, and how to distribute any online assets in their will, just as they include instructions for any other property. There are also a number of websites that offer services to help people plan for digital death. Consult with an estate planning attorney to be aware of all your options, and make life easier for your heirs once you’ve shuffled off it.