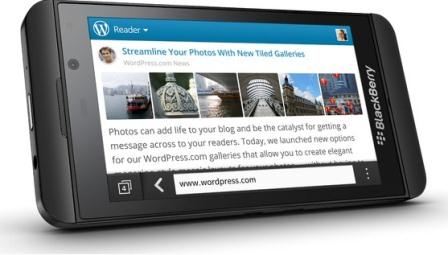 BlackBerry 10: Main Features (Review): Research In Motion (RIM) has announced that as of now the company is renamed BlackBerry, coinciding with the introduction of the latest operating system, BlackBerry 10.

BlackBerry 10 is a revamped version of the company’s operating system for mobile devices and these are its main features:

BlackBerry Hub is a single place to manage all conversations, whether personal or professional emails, BBM messages, updates or social networking updates. Includes the ability to connect to the BlackBerry Hub from anywhere.

Flow is where BlackBerry experience BlackBerry 10 “will look to allow flow of features and applications seamless way,” said the company. For example, you can select an attendee to a meeting to see his latest ‘tweet’ or your LinkedIn profile.

It also provides access to a small version of a picture that was just taken to launch the image editor and quickly apply a transform or filter, and then share it immediately with contacts.

Furthermore, BlackBerry 10 incorporates a new virtual keyboard “that understands and adapts to users”, who learns the words you use and how you use them. Then “the offers to be able to type quickly and accurately.”

BBM (BlackBerry Messenger) allows you to “share things with the people who matter in an instant.” BBM in BlackBerry 10 includes voice and video calls, and introduces the ability to share the screen with another BlackBerry contact 10.

Time Shift is a feature that allows the camera to take a group photo where everyone smiles with eyes open (in line currently features including systems such as Android, selecting the best faces in isolation).

More interesting is that now BlackBerry 10 comes with its own built-in video editor in online selling Apple iMovie on the App Store. Story Maker allows you to put together a collection of photos and videos, along with music and effects, to produce a movie in HD.

Meanwhile, the new BlackBerry browser 10 provides a reference for the sector in terms of support for HTML5 on smartphones, so the company promises that it is “incredibly fast” and fluid. “The browser has many advanced features, supports multiple tabs makes browsing private sites, including a reading mode, and integrates with the platform to easily share content,” the company reported.

Meanwhile, BlackBerry combines Remember memos, tasks, among other things, into a single experience. According to the Canadian, helps to organize and manage the information that you have on your ‘smartphone’ on projects or ideas, allowing you collect content as web pages, emails, photos, documents and other files, and then as a -do list, you can create tasks, assign deadlines and track your progress.

Meanwhile, BlackBerry Safeguard technology helps protect what matters to the user “and the company you work for.”

BlackBerry 10 also provides integrated support for Microsoft Exchange ActiveSync, so that smartphones  BlackBerry Z10 or BlackBerry Q10 can connect and manage “in a way as simple as other ActiveSync devices company“, or can be trained with BlackBerry Enterprise Service 10 to establish safe access to work email, applications and data behind the firewall.

Besides the functions built into the new operating system, the company has reported that the BlackBerry World store includes 70,000 applications compatible with BlackBerry 10 since its release. In this offer includes popular applications such as Skype, WhatsApp and Angry Birds. Meanwhile, applications for Facebook, Twitter, LinkedIn and Foursquare will come preinstalled on BlackBerry 10.