Here what she wrote on her personal face book message yesterday. 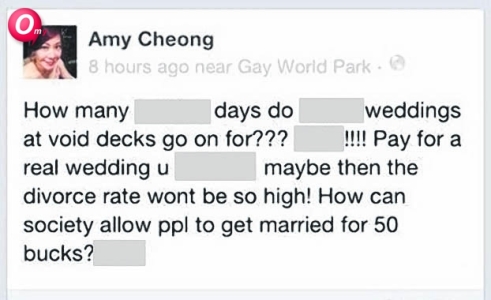 “Dear fans of NTUC Membership, we have been alerted of an inappropriate comment, allegedly made by one of our staff recently. This matter is being investigated and we will have a report in due course. This is a serious concern to all of us and will be addressed shortly. The Labour Movement centers on inclusivity and we will not accept words or action of any of our staff that is insensitive or offending to any community.”

After Zhang beauty of the message is forwarded by the Member are reproduced by NTUC Member face book, just one night, causing tens of thousands of NTUC Member surface Friends of the strong protest, curse her “racial discrimination”, “As an advocate racial harmony and equality for all agency staff, demeanor should not be so irresponsible. ”

Within 48 hours, Amy Cheong was fired from her cushy job as an Assistant Director at NTUC and chatised by no less than Minister Lim Swee Say and even Prime Minister Lee Hsien Loong!

There is also a Facebook page called “FIRE Amy Cheong” dedicated to her with over 7,000 fans since it was set up yesterday.

Her name is one of the top searched on Google and is trending on Twitter.

Ms Amy Cheong said in a statement on Monday that she’s aware of the pain she has caused through her insensitive remarks on social media.

She said: “Please see me as a person offering my most sincere apology.”  Ms Cheong said there was no racism intended in her posts.

She said she was trying to rest and the noise was affecting her greatly; and she understands that this was not a valid reason to post the comments.

Wuweiwei89 Rich Relationship With the Female lead to Suspicion