Darrine Ko Wen Hui: The name is out! Now everyone looking for the face…I think her full name is KO WEN HUI DARINNE.

Found this on the Sameboy Forum:

Medals & Prizes
To be eligible for annual prizes, including the Dean’s List and other prizes based on a student’s standing in a particular year, students must have read a minimum of 28 credits of law subjects at NUS Law School. Students who spend one semester away on a student exchange and students who, in a particular academic year, read 16 or more credits toward a non-law minor at NUS, will not be eligible for annual law prizes. This policy, however, does not affect individual prizes for particular subjects or prizes based on a student’s overall standing at the end of the degree. 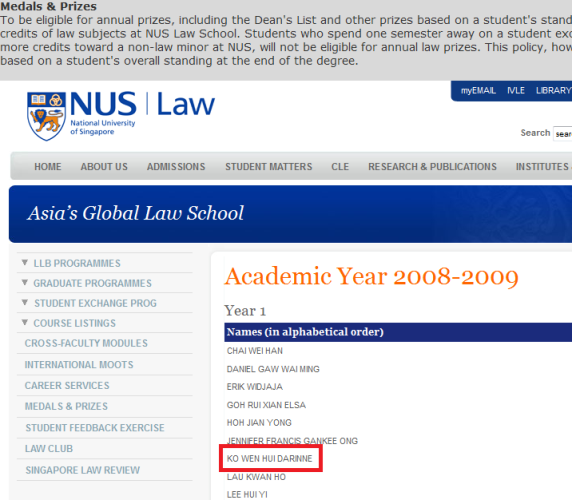 Court documents indicated that Tey, 41, is accused of obtaining gratification in the form of sex – on two occassions – and other items such as a Mont Blanc pen, an Apple iPod as well as two tailored-made shirts from former student Darinne Ko Wen Hui, 23.

Speaking outside the Subordinate Courts on Friday, Tey told reporters that the charges against him were very serious.

‘At stake is my liberty, integrity and livelihood. My reputation has been tarnished, and my family suffers as a result,’ he said.