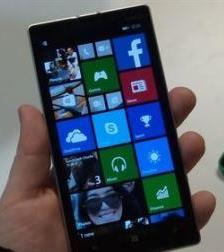 The Lumia 930, the most powerful Nokia bet at the moment is a compact terminal and slightly curved at the back polycarbonate . Integra Pureview technology 20 megapixel camera . The Gorilla Glass AMOLED screen, 5 inches has 1920×1080 resolution.

The device features a quad-core processor Qualcomm Snapdragon 800 2.2GHz , 2GB of RAM and 32GB of internal memory , no SD- slot card in addition to 7GB OneDrive . The battery is 2,420 mAh .

It has an MSRP of 459 euros without VAT free price. Nokia has revealed plans to launch operators.

The terminal will come with Windows Phone 8.1 throughout the summer. This operating system update includes several new features like a new design for the app store and the possibility for developers to answer comments on your software.

In the United States there will be social recommendations while in Europe only those based on the use are shown.

Windows Phone incorporate disaggregated information on data usage and battery and allow you to spend any ‘app’ to the SD.

It has also included improvements to get the camera hardware and connection support Bluetooth low energy- consuming less, designed for use wearable – technology, Wifi Always On and Miracast – second display system.

Nokia Storyteller now allows videos and Nokia Drive + Here will be free on all upgraded devices. It also included a center for quick menus with configurable notifications and more customization options as wallpaper on the menu to add new columns or more applications.

The system will let you sync your phone settings to avoid having to start over when changing terminal.

Windows Phone 8.1 will include personal assistant Cortana and Internet Explorer 11 with unlimited tabs, videos without leaving the application, private mode and synchronization with PC tabs as some of their news.

All customers with Nokia Lumia with Windows 8 can upgrade to Windows Phone 8.1 in summer.