Breaking Bad Bryan Cranston Presents New iPad Air: Apple has released the first iPad TV ad titled Air Pencil . In the spot the new tablet of Cupertino is obscured by a pencil until the end of the ad , highlighting the limited thickness of the device. 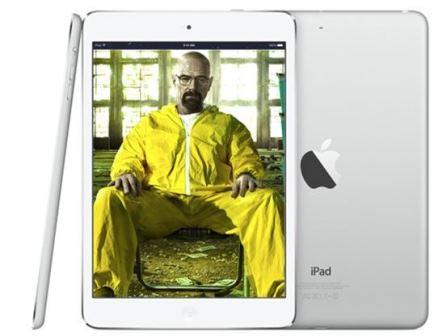 Just two days after the official launch of the iPad Air in San Francisco , Apple unveiled its new product in a television commercial narrated by Bryan Cranston, the American actor who plays the character of Walther White in Breaking Bad .

This differs from the previous spot emitted by the apple company as well as other manufacturers of mobile devices, in which celebrities appear or a comparison with competitors, such as Microsoft or Nokia against Apple .

The announcement was entitled because it appears a pencil Pencil on different surfaces throughout the spot until the end , which is discovered that the iPad Air was behind .

The spot thus refers to its characteristic , hence the name Air – lightweight and thin thickness of 7.5 millimeters thick and 453 grams in weight.

The iPad Air spot has not been translated into Castilian , but a rough translation of what he narrates Bryan Cranston is:

” A very simple tool but powerful at the same time . It can be used to start or finish a poem a symphony. Has transformed the way we work , learn, create and share. Were used to illustrate , solve and think new things. Scientists Use it , artists, teachers and students. has being in classrooms, meeting rooms, expeditions and even in space. and I can not wait to see where will be the next time . Introducing the iPad Air , lighter , more powerful, thinner ” .