iPhone or Android? Learn What to Consider When Making Choice: Android and iOS operating systems are dominating the mobile market, competitors and also doubts the users when making your choice, which is better iphone (iOS) or Android? 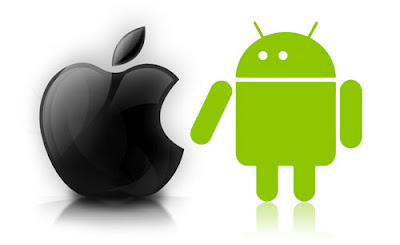 IOS is the operating system created by (apple) and that made the iPhone and iPod touch dominate the market for a long time.

However the android operating system and created by Google, is used by brands like Samsung, Motorola, who has won several users of smartphones.

Between iOS and Android, there are many similarities and unique features of their systems, well now check out this comprehensive guide to the main points that you should take into consideration when choosing which smartphone to take home, with the Apple operating system ( iOS) or Google (Android). 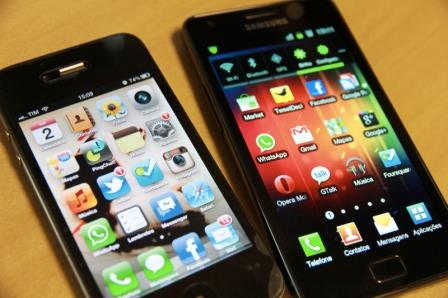 Operating System: Apple
This market since 2007 in the iOS operating system, takes advantage of the Android system in multiple requirements, regardless of the version of iOS 5. Is attractive as the cloud storage that is iCloud, and Siri voice command (available on phone 4s) iOS system is still a step a Front Android.
Its speed and recognition of commands is amazing, navigability is also very good
and positives to iOS, Android now despite evolving a lot with their new versions still faces a great difficulty staying on the same level as the apple system, because the iOS interface and the ability to perform several tasks at the same time are still better than Android.

Application Availability: Apple
One of the first things you have to evaluate before buying a Smartphone, is the number of apps, free or not available to him, after all they are the applications that will make your mobile multimedia piece several useful features or not. And in this regard Android and iPhone are very well equipped.

It is true that the iTunes AppStore and still has more options than the Android Market, but the trend is that producing apps already cater for the growth of Google’s operating system in the market and begin developing new content to obviously win more people .

Besides Google launched Google Muisc, and will be a strong competitor to iTunes, but has no denying the APPLE still leads in this regard, but with this new release from Google that can change course.

File Transfer: Google
One of the biggest reasons for complaints of iPhone users are transferring files, songs for you to pass, you need to use iTunes, since Android is just copy the files you want and play the folder of the phone.
Good over this can not be an alternative to go will change the user’s choice, but logical for that convenience in the Google software, deserves a positive point.

Customization: Google
On one side released, the other exclusively, if to sum up this dispute between Android and iPhone, this would be the best way, the first we call “Forever Alone”, but with unique features and operating system made just for him and details interesting as layout
standard. The second is not.

The Android jersey would be the “Popular” an operating system made by various brands such as Motorola, Samsung and others, it is made up guardianship of open-source, allowing anyone to modify. Ie allows the user to customize almost ALL Android.
This is another plus point for the operating system from Google because of the freedom to create customize Smartphone leave with your face, your style, for some this is critical. 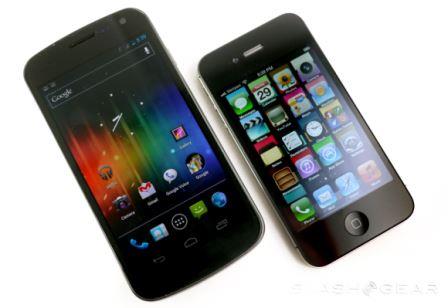 Design, Screen, Camera and Keyboard: Dead Heat
The new model iPhone 4s seems to have reached a level very close to perfection the questions listed up there. Its designer is even more innovative and unique, with slight changes of their older models, not to mention that your screen looks ideal for a Smartphone.
Its two cameras front to (video calls) and back to take photos and even shoot in HD, moreover the virtual keyboard had a slight change, as if users goes without believing that now he is in the ideal model.

But the calm yet to declare the victory of the Apple device, this is due to the handsets Androids have also evolved, Galaxy SII, HTC Edge and Motorola Droid Razr, for example are coming very strongly in the market with specifications very interesting and cool in this regard, moreover was mentioned in another topic, Android allows for more flexibility in all functions, in addition to choose the model most suited to you and customize it.

The issue of the customization of Android’s pluses for him indeed, but nevertheless be careful where you play, because you can contract files that can be harmful to your device.
The iPhone is not very different from that, an example is the report by Symantec, maker of Norton Antivirus, ensures that the Iphone offers complete protection against viruses, however has only moderate evaluation to isolate and prevent abuses of apps. many more users opt for the unlocked device and therefore are more exposed to viruses.
Androids devices are not very advanced in this regard, especially since not offer checking provenance of applications such as the (Apple), and does not have a system for decoding and information protection, because in it you can download any application to the Android system does not will restrict how Apple.
That you may be exposing your data any third party without knowing.

The exclusive accessories for iPhone as, cases, docks, speakers, headphone, armbands .. are indeed impressive and pretty much dominate this market. These accessories make the iPhone gain an external face, more personalized, which does not happen much with the operating system, for cer a device exclusive to Android iPhone wins in this regard, as there’s no way of Google to create accessories for all smartphones with Google system.

The advantage of Android devices that are the price, besides having several varieties separated by brands, you also have various prices so they are unlocked or purchased together in signing any carrier plan you are buying, are much more cheaper than the Iphone.
The devices containing the Android OS takes advantage of the iPhone in the Brazilian market, so if you are with money short, opt for Android, will be the best option.

It is not easy to compare the operating systems Android and iOS as the iPhone has not only a competitor but many rival smartphones with the Android operating system installed. yes it is still beautiful and manages to put most of that equipment in the pocket.
But of course Android’s growth in the market is influenced by it to be much more devices than iOS, ta sure it does not grow just because of being outnumbered more also because the service offered by Google is improving every day

For now, Apple is better. But in the very near future. No one knows, that may change now that Google has plans to buy Motorola, who knows he will produce their devices. So to you that wanting to buy a Smartphone iPhone is still the best, however if you are short of money, or freedom to enjoy your device buy an Android, is a good choice.