French Open 2013: Rafael Nadal Enters in Final After Epic Win: The Spanish tennis player Rafael Nadal will seek the eighth title of his career at Roland Garros, the second Grand Slam of the season, after overcoming an epic match in the semifinals to world number one Novak Djokovic (6-4, 3-6, 6-1, 6-7, 9-7), which will have to wait to win the only ‘big’ is missing.

Four hours and 37 minutes lasted thirty-fifth meeting between Djokovic and Nadal, with 20 to 15 in favor of the Spanish, who came to dominate the Court Philippe Chatrier, the one where it has always beaten the Balkan, as happened in the final last year, the 2008 and 2007 semifinals and 2006 quarterfinals. 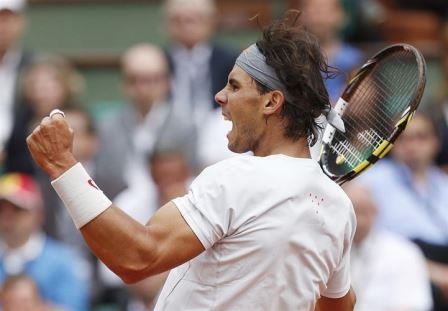 Skimming close the drama that took place in the Australia Open final 2012, which lasted nearly six hours, Nadal has avenged on Friday from that tough loss with a similar game, in which two contestants got the feeling of having the win or loss at various times. Finally the Spaniard decided mental strength amid the prevailing tired, after a fifth set that lasted an agonizing hour and 22 minutes.

The first two sets were similar sign but with the roles reversed: slight dominance of one of the two players that allows you to join the set. The first step gave Nadal, who went out insurance without dropping a single ball of ‘break’ in the original manga and adding 13 hit winners. A break of serve in the seventh game was enough to get ahead.

Within Carousel alternatives that characterized the party, Djokovic take the baton touched in the second set, but did not react until his opponent went to 3-2 and serve. It was the turning point pursuing the Balkan, who chained his best run of play the game, stringing four sets to balance the scales.

NADAL THE MENTAL STRENGTH DECIDED IN THE MIDDLE OF FATIGUE

The more ‘plugged’ seemed, came the blackout world number one, whose mind was far from Paris in the third set. Nadal, who never dropped a millimeter concentration, did not miss the opportunity to pound his opponent in the shortest part of the game, only 38 minutes to be at the final step. But there was still much work ahead.

Djokovic, who amassed a whopping 75 unforced errors in the match, he contracted Spanish mental strength to hold on to the semifinals in the fourth set. 4-3 and take first. 6-5 and remove later. The advantages that Nadal could not confirm to reach the final without going through the ordeal of the fifth set. Reinforced, ‘Nole’ comfortably prevailed in the tiebreak.

In this short sleeve, was the Spanish who Barrunto the second defeat of his career at Roland Garros, after the loss to Robin Soderling in 2009. The Serbian scored a ‘break’ in the opening game and held out to 4-3 and remove. At that time, when a festival of tennis flowed from both ends of the court, Nadal broke his opponent’s service and ordered the party to an agonizing end without the loophole tiebreak.

Rare is that Nadal is a party escaped when the mind is stronger than the legs. From 4-4, the final battle lasted eight games until tournament seven times the coup with a game to rest and blank. Djokovic fell again in Paris and returned to succeed Nadal, who reached the ninth consecutive final since returning from injury, leaving his historic 58-1 mark at Roland Garros.