‘Genius’ 13-year-old with IQ of 162, Accourding to the BBC, Neha Ramu from Surbiton in south-west London is only 13 – but she is already a genius, with a higher IQ than Stephen Hawking. 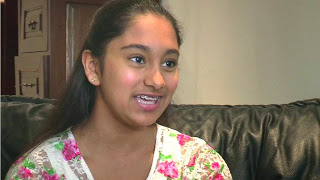 She scored 162 in a Mensa IQ test for people under 18, the highest possible mark – putting her in the top one percent of the UK’s brightest people. Any score of above 140 is considered to be that of a genius.

Neha came to the UK from Bangalore in India when she was seven, but it was only in recent years that her parents started to realize the true level of her intelligence.

The BBC Asian Network’s Nancy Cole went to meet Neha and her mother Jayashree at their home.