Nokia introduces Asha 501 An Air “Very Lumia”: Nokia just introduced in India its new handset for emerging markets, the Asha 501. It is a phone with a very affordable and aimed at emerging markets, with the Finnish company will try to strengthen its position in this sector. Striking for their similarity to the Lumia with Windows Phone. 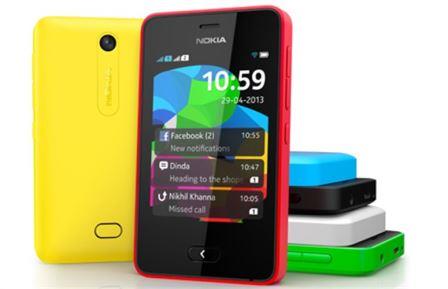 In the presentation, which was held in New Delhi, the Finnish company has introduced its upcoming low-end terminal which will attempt to gain a foothold in emerging markets. It is a terminal with a design reminiscent of another range of smartphones from the same company, the Lumia, although less ambitious characteristics without Windows Phone.

The new terminal opens a new platform of ‘software’ called Asha Platform, which has been improved taking advantage of the purchase by the company Nokia Smarterphone.

The new system has Fastlane feature allowing the user to move through the terminal with gestures or finger movements. The user can, for example, through a pan, move from one screen to another and view a history that shows up to 50 of the applications you have used before.

The company also explained that the Asha 501 features Nokia Browser function with which the user can save on the cost of Internet data. With this technology, the data that the user will receive before stored in the cloud and tablets up to 90 percent, so that faster navigation.

The Asha 501 features 2G and WiFi connectivity, has a 3 inch screen and full touch. It also features a 3.2 megapixel rear camera, an internal memory of 4GB, expandable up to 32GB via a microSD card.

The terminal battery has an autonomy of 17 hours talk time and 48 hours standby.

CONNECTION NETWORKS:  Another major new feature is the new terminal users can connect to social networks through Twitter or Facebook applications, or enjoy your free time with games like Little Big City and Real Football 2013. In addition, Electronic Arts offers 40 free games that users can download them to the terminal.

THE terminal will be sold in two versions, or with the option to include a SIM or dual SIM. The latter will feature Easy-Swap technology allowing to change without turning off the phone, one SIM to another. It will be available in different colors, red, green, yellow, blue, black and white.

The Asha 501 is priced at $ 99 (68 euros) and will be available in 90 countries from the second quarter of this year. Along with the terminal, the company has designed red headphones that come with the device, which they hope will become an icon of the brand, like Apple headphones.

How to Supercharge Your Android Phone Without Root