Beyonce Becomes Queen Tara, From Music to Movies: Beyonce lends her voice to the Queen Tara of “Epic”, a children’s film for 20th Century Fox, which opens in the U.S. on May 22 and August.

It is the singer’s first job after giving birth. Now your little Blue Ivy is 15 months and Beyonce hopes someday her daughter proud of her. 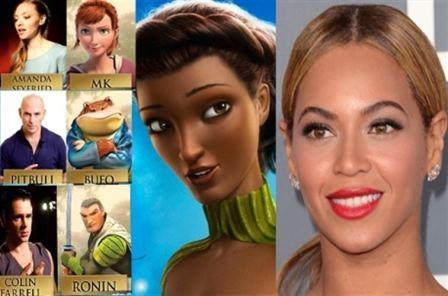 When recording right after giving birth, the singer has confessed that had rampant hormones, while “literally had tears in my eyes when I voice. There was a scene in which the Queen Tara chooses its cocoon and I imagined seeing my daughter, “the artist told The Associated Press in an interview from London concerts.

And is that Beyonce has already said she is multifaceted “I’m an artist and I love to express myself and I’m not one-dimensional,” he said. “I have different feelings every day and now I feel I’ve done movies that I can try to recreate those characters on stage.“

But to top it off, the film from the creators of “Ice Age” and “Rio” will also feature the voices of Amanda Seyfried, Josh Hutcherson, Steven Tyler, Christoph Waltz, Aziz Ansari, Colin Farrel and even Pitbull.

This is a teenager who is transported to a secret world in the forest, where he is involved in a battle between good and evil and to protect the special flower bud to save the forest.