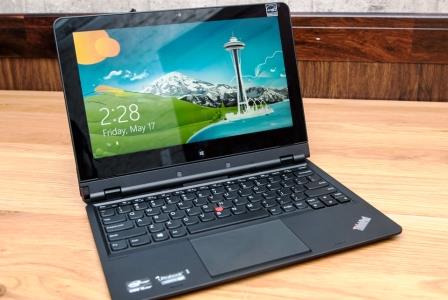 It is also running Win8 PCs Lenovo’s first removable design between the screen and keyboard making it user a true tablet this time all operations will be performed using on-screen 11.6 inch touch. Helix is ​​targeting business users, so the machines will be sold on the project not to retail end users and in Vietnam as well.

On the connection between the screen and keyboard, Lenovo has designed contact area between them symmetrically shaped, so there are 2 ways to connect the Helix screen keyboard on screen such as a conventional laptop style and type 2 is turned up on the screen, this time the noble role outriggers when watching movies, presentations. Lenovo calls it a “rip & flip”, ie “removed and rotated 180 degrees.

Despite its compact size, the screen and the keyboard weighs 835g weighs 1kg, but Helix is ​​equipped with a very stable configuration: CPU options from Core i3 to Core i7, up to 8GB RAM, 256GB SSD and screen Full HD resolution, 10 touch points simultaneously. 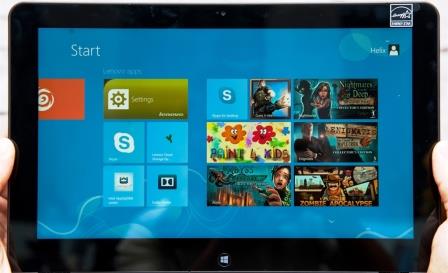 The keypad to check for Helix is ​​also extended batteries for the machine. According to Lenovo, the Helix entirety with 10h hour battery life, which is the tablet keyboard 5pm and 5am. When leaving work without keyboard, Helix is ​​installed by default to run in battery saving mode, while maintaining optimal battery life.

When attached to the keyboard, the machine will switch to high performance mode, the CPU can run at full capacity to bring the computer to the most powerful. Thus, the keyboard is also equipped with 2 cooling fans to increase cooling capacity for the plant. Also, when connecting the battery on the keyboard will act as pin 1, pin 2 of the pin is, pin 1 will be taken before and at the same time charging the battery to full 2.

In actual testing, Helix when connected to the keyboard and continuous use from 6.5 to 7 hours continuous with everyday tasks such as surfing using the web, use Office, listening to music and watching videos online.

When introduced Helix, Lenovo Thinkpad can say this is the brightest screen in Thinkpad their families with 400 nit brightness which comes with a Full HD resolution, IPS panel and Gorilla Glass glass.

These factors help to monitor Helix has good visibility and sharp realistic colours and subdued but yellowish screen when displaying white.

HTC One X The Evolution of Best Smartphones on Market