Lindsay Lohan’s ‘pregnant’ tweet? ‘April Fools’: Everyone knows that the day of the innocents in the United States, the so-called April Fools Day, is celebrated on April 1. Well, it seems that Lindsay Lohan has unleashed all alarms when posting on Twitter that: “Its official. Pregnant …” 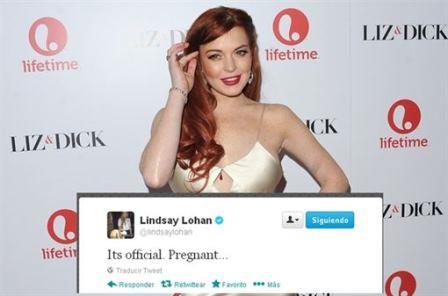 Lindsay Lohan do not know if we are taking literally the hair and is laughing at herself or else what you have written is absolutely true. And the actress has posted on Twitter shortly after the end of the April Fools Day.

If it was a joke, Lindsay could have spent much earlier and not wait so long. If true pregnancy, the future father of the child would be Avi Snow, singer City of the Sun. The band was formed Avi Snow in 2010 and is originally from New York.

It shuffles the other hand also the possibility that Lindsay Lohan will have her Twitter account hacked. Not the first time a celebrity has come up with this. Lindsay Lohan is adept in appearing on the covers and be involved in various scandals.

She loves being in the spotlight of the media and being the center of attention. If we count the countless times that the actress has been sitting in the dock by legal problems, we would lack fingers.

And not only Lindsay Lohan has been in the press for her arrest, but also starred in the festivals. Your best revelers have been spent with Paris Hilton and Nicole Richie. However it seems that these two have started to direct her life while Lindsay Lohan has not found its way yet.

We expect news on the artist to confirm or deny a hundred percent what Lindsay Lohan wrote on her Twitter.