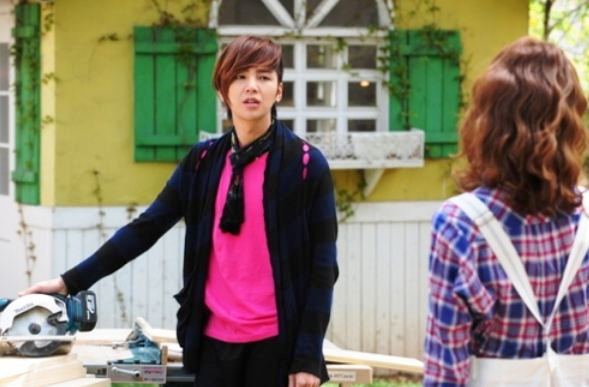 The second comedy he directed with his own “Love NG” come New Year.

If you wonder actually a play pieces can also be a director, I believe Zhu Shimao will solemnly tell you that “In fact, I was an actor, the actor when the director is a rare thing! When in the 1980s he and Congshan starring “Wrangler” Huobian the National.

It is a standard “Wryneck Big Guy” one, acted in movies and television is definitely more than sketches, just because he is the same from the 1984 Spring Festival Party Peisi cooperation skit start out of control and become a comedy actor and fixed in the audience the impression.

After falling out with CCTV away from the Spring Festival Evening, Zhu Shimao has been operating his own film company, so he changed jobs to dry from the director to veteran actor and boss identity, is not worth the fuss, and the director level with the standard of his performance is matched This Love NG also looked very nostalgic, and the overall feeling a little taste of the 1980s comedy.

Although the TV drama tells the story of the “others”, but the thing that points in their own circles sometimes out self-deprecating, Love NG is the play within the play “tells of a crew filming process all the interesting and role of grievances and disputes.

The young actor Zheng straight invited to star in the movie “Small Town In The Past”, did not expect the movie invited returnees the director actually is former girlfriend, group play of the crew of the the Chuan child heroine Su Nina actually childhood childhood sweetheart three ni, this two sets of shear and chaotic quarrelsome lovers so shooting is whipping up waves, scenes embarrassments began staged.

Wake up ZHENG Zhi afraid of being found hiding in a closet, the wardrobe is moved to the studio to make props, When the doors open Yishanbuzheng Zheng straight appear in front of everyone that scene is really surprised and delighted Corpuscles. The crew is also a condition often shoot horses and horse riding play scared straight with Zheng has been rushed to the crew, fireworks shot war drama teacher turn director.

Su Nina origins of country girls Sichuan sub careless exposure and become the focus of public opinion, which is outside the movies than simply play lively.

End of nature lovers to be ironed out to get married, the videos smoothly crank up harvest Award Surreal what a happy ending that is a must!
Can see that the director Zhu Shimao using this “play within the play the story mode, in addition to convenient to create dramatic conflict and humor, but also would like to say some unhealthy tendencies in film and television under the irony.

In addition, Zhu Shimao also he is good at comedy delight into the film, the premise too ZHENG Zhi eat noodles that scene, obviously cooperation to him and Peisi the classic comedy pay tribute to eat noodles.

Crew assistant Fudge old actor everywhere the words grab ahead in various touted him rack up, so that he is not good to get angry, you delight to me to essay-style.

Oshin the Shao the group, Xiaoran, Gillian starring lineup Well, are showing their true quality of the performances, Zhu Shimao also as usual, relying on good karma to pull Tielin Zhang, Zhao Baogang, Chin, Pan Changjiang, Sun Nan and stars such as acting as a create some the stars sink “New Year festivity.

The last old Mau children are also at the end playing his guest appearance, to lead four starring in sunglasses walking on stage in slow motion, pull the wind, leaving the audience “Su Nina in the end is not ni” teasing you.