Lance Armstrong Interviewed by Oprah Winfrey: The Lance Armstrong admitted to doping during his career, making it clear that in his opinion There is humanly possible to win the Tour de France without it, that “The Worst Thing” was that he thought he was “Not Cheating” , considering that it had no advantage over its rivals, and that the U.S. Postal network was not sophisticated but “The most professional and intelligent.” 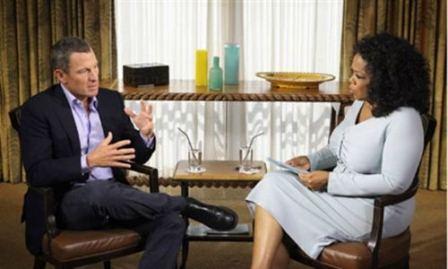 These were some of the confessions which the Texan held last Monday and Oprah Winfrey were issued for the first time on Thursday, early Friday in Spain. The exciclista confessed his doping practices, but in this first part of the interview, just naming names, though, between the charges refused, they stressed that his donation to the UCI was never to “hide anything” and “never” gave positive in his career, noting in this regard that the doping culture had changed and that when he returned to competition did not. The second part will be in Spain, at 3.00 pm on Saturday, also by Discovery Max.

With simple “yes” as he required the interviewer popular, confessed that he took EPO, testosterone, growth hormone and blood transfusions were made, and that was doped in his seven victories in the Tour de France. “In my opinion it is not humanly possible to win without doping,” he said.

Armstrong, quiet, began to take drugs “mid-90s” and said his attitude was to deny everything because he believed that “it was too late for most people.” “I see it as a big lie repeated many times.’s Story was perfect for a long time, but behind that image and history had jerk and I missed that. History is bad and toxic and most true,” he said.

So he said that he did not invent “culture” of doping and that cycling was “paying” for it. “I had no access to the other,” he said, denying that, as said USADA, the U.S. Postal network was the most sophisticated of the story. “It was not, was professional, certainly, clearly intelligent, but very conservative, at great risk,” he said.

Armstrong would not accuse “anyone else”. “I took my decision, the error is mine. The idea that someone was forced (to take drugs) is not true, I will not call anyone a liar,” he said. Armstrong acknowledged reality of ‘Motoman’ happened to them and that they had drug EPO “incredibly beneficial in so intense sports like cycling.” “My cocktail was only transfusions, EPO and testosterone,” he admitted.

PRAISE FOR SURPRISE TESTS AND PASSPORT

Armstrong said he had never “afraid” to make him known. “They did not come to your house, did you run tests in theory you could, but did not, and during races are clean.’ve Changed two things out of competition testing and the biological passport. Really worked,” said. In that sense, he was sad because the USADA report doped say that when he left his retreat. “Absolutely not, the last time was in 2005,” he confessed.

About his role in making decisions, made clear that it was “team leader”, but had “managers, team managers …”. “Do not dismiss anyone would say no to doping, but the leader always leads by example, so that was a problem. Were older and made our choices,” he said.

That did the name of Christian Vande Velde, who accused him of pressuring and threw them otherwise the team. “I know I’m not the most credible person in the world, but it’s not true,” he said. “When you go to other teams and follow the same pattern of behavior …” he continued. “You mean doping?” Oprah Winfrey asked. “Right,” he replied.

“Yes it is true that intimidated them. Tried to control everything and if someone said something I did not like what he tried to control.’ve Been like this all my life. Grew up as a fighter, I always was. Already before cancer was a competitor, but not hard, and then wanted to win at any cost. With cancer I said I would do anything to survive and I took that attitude to cycling. was just trying to perpetuate the history and hide the truth, that was the second time in my life that I could not control the outcome, “he explained.

The second to go was the name of the controversial Dr. Michele Ferrari. “It is difficult to talk without naming, but there are good people in this story, they are not monsters,” he said. “It looked like a good person, and I still see well. Was not the brain. From the standpoint of the public was a mistake to associate myself with Ferrari, but there was more imprudent,” he said.

Armstrong, who is described as “philanthropist and cocoon” during her success and fame, said it had much to do “the desire to win at any cost”. “It worked well on the bike, in cancer, but the level reached is a defect,” he said.

“There is more happiness in the process, win came as a result. Felt I was not hurt nor I felt that was wrong. Worst of all, you did not think was cheating. Went to the dictionary to find the meaning of ‘trap’ and I saw it was ‘take advantage of a non-legal on someone’. felt that it did not. could not understand the magnitude of what happened. now because I understand people’s anger. understand that many feel betrayed, those people supported me and believed in what he was saying, “he said.

NOT PAID TO UCI

Anyway, recalled that “never” was positive, although he spent “hundreds of checks”. “And I went because there was nothing in my system,” he said, while, although not “fan” of the ICU, there was no “payments” to a lab to hide a positive in the Tour of Switzerland. On the donation made to the UCI, said it “asked”. “I can not possibly answer that question, but it was not hiding anything in return. Called me saying that he had a lot of money,” settled, referring to other “shady business” within the federation.

The cyclist, who apologized to Emma O’Reilly, his exmasajista, and has not been able to make “peace” with his former teammate Frankie Andreu, whose wife Betsy was accused of bullying, spoke about Floyd Landis, recognizing that his confession “was the turning point. ” “I was in the Tour of California and sent a text message saying he was going to hang a video on Youtube. I told him that what he did but I was left alone. Put it on Youtube No, but it was the ‘Wall Street Journal ‘”he recalled.

He also said that a decision was not “completely” his failure to provide a place to his compatriot in the team, stressing that so far supported his cause when he was penalized for doping at the 2006 Tour de France. “It turned my back,” he stressed.

Armstrong was not sorry to be back in the competition (“We would not be here had not done”) and with respect to the investigation initiated by the Department of Justice stated that “treatment offered,” but it had nothing to do with that the case shut. “No, there is very difficult to influence,” he said. “I got rid of the wolves, have moved away from the door,” he added.

In contrast, used was to end. “I analyzed while others. They took testimony and then they came for me,” he said. Now, does not know whether the agency would cooperate to clean cycling. “I love cycling, but there are people who do not respect me. Disrespect the rules, not me I must say that cycling is clean, but if there was a Commission of Truth and Reconciliation, would be safe” said.

Finally, had words for his compatriot George Hincapie, who was with him in the seven Tour victories. “Do not blame him, had a lot of pressure. Voice is more credible in all this, you know the story better than anyone. Still are great friends“, he said.