Actress Emma Stone For W Magazine Cover February 2013: Emma Stone happy with the recent release of her film “Gangster Squad” and appearance on the cover of February W Magazine. 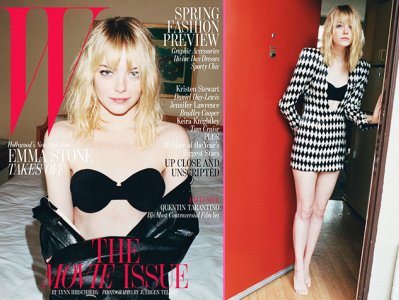 The young actress appears in a very sexy posing and showing a bit more than she usually does. The magazine appears with a black bra, a leather jacket and a shaggy blond hair.

Emma proves once again that beauty is a mixture of sensuality and innocence that only a celebrity as it may reflect.

Emma is a young adult in Hollywood, meaning she’s always trying to prove she can be as edgy and sexy as she is sweet and funny. The cover shoot was also lensed by Juergen Teller, who’s made his name shooting Elle Fanning and other celebs for Marc Jacobs’ rumpled, poorly-lit ad campaigns.

Should we be so surprised Emma was styled to look like a confused 16-year-old… waking up in what looks like a cheap motel?

The issue for the actress has been the face of next month is expected to be a success as Emma Stone, known for blockbuster movies like ‘The Help’ and ‘Spiderman’. And is that Emma is one of the most coveted star with an angelic face that gets all the attention.