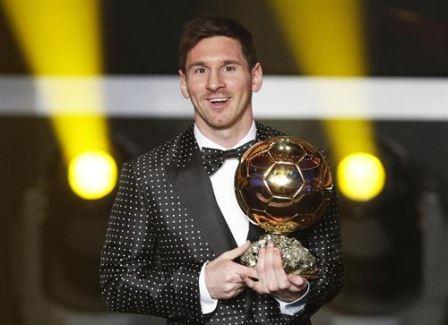 Argentine striker of FC Barcelona, Leo Messi has won the FIFA Golden Ball 2012, after winning the final vote teammate Andres Iniesta and Real Madrid’s Portuguese Cristiano Ronaldo, so you get the award for best player of the year for the fourth time in his career.

Messi gets his fourth award in a row, after closing a year that has beaten all records, scoring a total of 91 goals in the calendar year, surpassing the German Gerd Müller (85), which until then was high. In addition, the Argentine team has won the Copa del Rey.

Rosario striker has recognized the emotion that makes you get the award for the fourth consecutive time. “The truth is that it’s amazing to receive this award, and the fourth to be followed up is impressive. Award I want to thank my fellow Barcelona, because without them it would have been impossible,” said the Argentine.

Messi had words of admiration for his rival for the prize Andres Iniesta. “Training and playing every day with you is a lesson. I also want to share with my colleagues from Argentina and the people who voted me, captains and coaches,” he said.

The Argentine, who admitted he was “nervous”, had a memory for their relatives. “I want to thank my family and friends who are there and, finally, and most importantly, my wife and my son, that’s the nicest thing that gave me life,” he concluded.

Messi, wearing a polka-dotted dinner jacket and matching bow tie, said: “To tell you the truth this is really quite unbelievable. The fourth award that I have had is just too great for words. I would like to recognise my other colleagues from Barcelona; Andres it has been great to train and play alongside you.”