Vint Cerf Has An Interactive Map to Defend a Free Internet: Internet users around the world are uniting to demand that the Internet remains free, out of legislation that may affect autonomy. Companies like Google and people like Vint Cerf are encouraging users to join the mobilization. It has created an interactive map that shows signs of support for the cause, which is being organized through the ‘hashtag‘ # freeandopen. 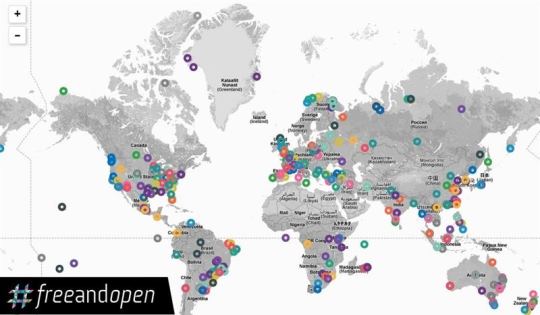 The International Telecommunication Union (ITU), a United Nations agency, has initiated a meeting in Dubai in which the major countries of the world gather to discuss the regulation of the Network The goal is to review and establish a new treaty Internet, updated to modern times.

Although the official aim is to update existing international law on the Internet, different organizations, companies and experts have claimed that the result of the meeting of the ITU may be the loss of Internet freedom. In the complaints expressed by companies like Google is argued that the imposition of new rules can cause Internet is no longer a free space in which to express and develop.

The company has created a web page for users to report on the meeting of the ITU and to show their opposition to attempts to limit Internet. A campaign that personalities have joined as Vint Cerf, one of the fathers of the Internet, which has expressed its refusal to change the philosophy of the Network

“In 1973, when my colleagues and I proposed to Internet technology, we advocate an open standard for connecting computer networks together. This approach was not only philosophical, but also was convenient. Our protocols were designed to make networks owner did not have Internet, “said Cerf.

Vint Cerf stressed, as Google has done on several occasions, that the intrinsic freedom of the Internet has enabled many people to express themselves in environments where there checks and censures. “Because it has no boundaries and is all (Internet), has brought unprecedented freedoms to billions of people around the world,” he explained. For these reasons, Cerf believes that try to restrict Internet freedom is a violation of freedom of billions of people.

INTERACTIVE MAP:  Facing the ITU meeting, Cerf has expressed opposition has denounced as Internet regulation could allow governments to practice censorship. To avoid this, Cerf has encouraged users to speak out against this possibility and show that they are in favor of keeping the Internet free from control pursued. It has created a manifesto which users can subscribe.

To do this, in a blog post of Google, Vint Cerf has promoted participation in # freeandopen. This is a ‘hashtag’ in which users can speak out against legislation Internet, so your comments are part of the protests, while the manifesto signed by a free network.

To group all comments and reviews from users around #freeandopen was created freeandopenweb.com web page that displays an interactive map of the user comments. In this map, made with the technology of Google Maps, you can see the comments that users perform worldwide. You can access these reviews to read or view messages in favor of Internet freedom.

“In freeandopenweb.com interactive map you can see that people from all over the world have signed our petition, using the ‘hashtag’ # freeandopen in social media,” said Vint Cerf.

Those interested in signing the manifesto for an open network can do it from the same website. Currently more than 1.25 million users have shown their support for this initiative and the number is growing steadily.

Join the hands of Freeandopenweb