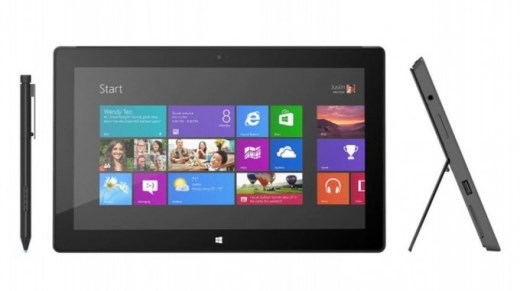 The RT of Microsoft Surface tablet runs on ARM-based processor. This means that it is not compatible with software written for Intel processors. The Living with Windows 8 Pro Intel Core i5 will, which means that users can run applications such as QuickBooks, Photoshop and other important tools.

In addition, the tablet will have 10.6-inch screen with full HD resolution of 1920 x 1080 pixels, 4GB of RAM, Bluetooth 4.0, Wi-Fi and two 720p cameras, one placed in the front and one at the rear . Its other specifications will be a full size USB port 3.0, and mini Display Port support in order to enhance an external display with resolution of 2560 x 1440 pixels, meaning that you can use Apple Thunderbolt Display). It will include a pen touch input with Surface to be included for the occasion.

This tablet device will be launched in two versions Storage: 64GB or 128GB. The 64GB version will be sold in the United States at a price of $ 899, while the 128GB version can be obtained by $ 999. Considering terminal specifications, the price is certainly competitive. It follows a similar cost to Ultrabooks and Apple MacBook Air 13-inch, making it interesting for a number of users.

The big question: When will this end?, The answer, for now, without an exact date, but Microsoft says that users can buy the tablet in the month of January 2013. The answer satisfied in a way, because we can count the days for which this terminal is in store. However, doubts remain in the air, as knowing what else will offer Surface Pro with Windows 8 when it goes on sale.

For now the expectations are good, although it is clear that Microsoft has either assumed that its more powerful Surface miss the Christmas season and will be a bet that reach users gradually next year and aim to win 2013 .