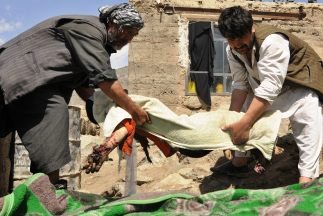 A mine explosion in Afghanistan killed 10 girls: The victims were between 8 and 10 years. According to official sources to which Efe had access.

At least ten girls were killed and one more was seriously injured after a mine explosion in eastern Afghanistan.

As defined by the regional police chief, Hazrat Muhammad, the outbreak was recorded in Chaparkhar district, in the eastern province of Nangarhar.

Is Afghanistan one of the riskiest countries for children?

He explained that the victims are between 8 and 10 years old and were playing when the explosion occurred.

However, a district government spokesman told AFP that possibly one of the smallest mine accidentally hit with an ax, as they were collecting firewood.

In this regard, the director of the Provincial Development Council, Malak Mohkam Khan, told the local agency AIP victims are Shoab neighboring village, and several of them have family ties.

AIP also cited “other sources”, which does not identify and who said that there are 12 girls killed by the explosion of the mine.

It is one of the most heavily mined countries

About this tragedy, the district governor explained that it is “an old mine at the time of jihad.” Since the Soviet withdrawal in 1989, after ten years of occupation have destroyed about 700,000 landmines in the country, according to UN figures. But Afghanistan remains one of the most “mined” in the world.

Civilian deaths in attacks or the outbreak of artifacts is common in that country, immersed in a process of gradual withdrawal of NATO forces on a schedule to be completed in 2014, when the Afghan army take security throughout the country .