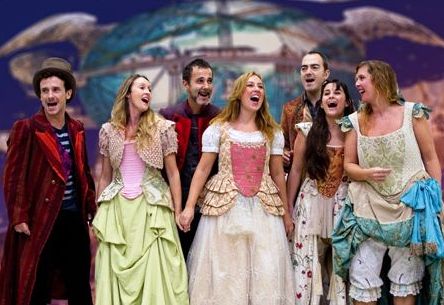 The appointment will be from December 21 to January 6, 2013 in Madrid Teatro Pavón. As he explained on Tuesday Helena Pimenta, director of CNTC, this scenic bet is twofold: “on the one hand, to discover these texts from the perspective of the smallest and aficionarles them and give more coverage to another job the company. ”

Pimenta highlighted the “generosity” that has guided Uroc Theatre in this production in co-production “has worked in the manner of comic companies more hopeful,” he said. “For us it has meant an injection of enthusiasm, a constant lesson in theater,” he added.

Olga Margallo, Uroc director, has stated that the job of selecting the text passed by “adapted for children and youth a bit complex works that address issues such as jealousy or revenge.”

“The best thing about this book is that it presents Calderon life within a scenario and that helped us to create ‘Another great theater of the world’. The author had permitted and, in fact, he had written well today,” he assured.

Also, by having long experience of the company, believes that children “hook” when they are interested in history. In addition, this type of arrangement offer “a healthy time to turn away from the slot machines.”

Theatre director Uroc also pointed out that the idea that this function provides argument revolves around the fact that anyone “can change a reality that does not like”. As a subplot, also addressed the issue of inequality through the confrontation of two peoples: Yotodo and Yonada.

A dying world and a girl who discovers how to heal and how to eradicate “laziness is killing us” are the cornerstones of this text that retains the musicality and beauty of the verses of Calderon de la Barca but uses a modern language.

The questions that the children of the members of this company have made them inspiring this show that features Antonio Muñoz de Mesa and Roberto Bazán as heads of the nine songs and whose cast includes, among other artists, Victor Ullate Roche, Nines Hernandez, Rosa Clara Garcia, Celia Vergara and Ivan Villanueva.

For Muñoz de Mesa, who is considered a “canturreador”, ie those who sing ‘cappella’ to provide the rhythm and melody, Calderon would be today “Broadway lyricist, a Stephen Sondheim.” Also, the artist praised the “very choral work” the company does in this proposal to “get out of the script can help change the reality of a country,” he says.

‘Another great theater of the world’ is the greatest show format that has conducted Uroc Theatre. The company has already been invited to the next festival to be held in Porto, Lisbon and Miami and also has pending a national tour with this function.