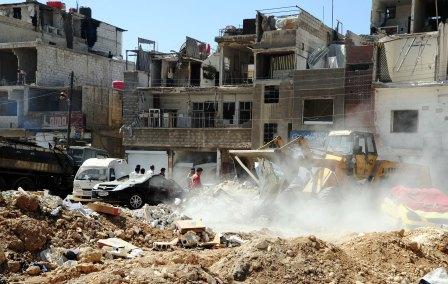 U.S. group includes Syrian Front Nusra on its list of terrorist organizations:  U.S. has included the Waterfront Nusra, one of the most active rebel armed groups in Syria, in the list of foreign terrorist groups and has denounced Islamist organization that is trying to “hijack” the rebellion against Bashar al-Assad regime in the interests of Al Qaeda in Iraq.

According to U.S. authorities, the Front Nusra claimed nearly 600 attacks in several major cities of the country that have killed many innocent people.

“With those attacks, the Front Nusra tried to present himself as a legitimate part of the Syrian opposition when, in fact, is nothing but an attempt to kidnap AQI Syrian people’s struggle for their own evil purposes” said the State Department spokesperson, Victoria Nuland, said in a statement.

Inclusion on the list of terrorist groups implies that the U.S. authorities will freeze any assets that the organization dispona areas or areas under U.S. jurisdiction. Also impede the provision of any material support from the United States.

Among his more than 40 attacks include suicide attacks and operations with light weapons and home-made bombs in cities like Damascus, Aleppo, Hamah and Deraa, according to U.S. authorities.

The Front Nusra not part of the new unified rebel command, made in Turkey this past weekend, bringing together the so-called Islamist Front – formed two months ago and whose members are Ansar al Islam – Military and Provincial Councils, operating under the orders of the Free Syrian Army.

However, some commanders of the new unified command to look favorably Nusra Front. “They have their own leaders and their own structure, and fight side by side with the Free Syrian Army. Among them we have only seen good things and are good fighters,” he said Monday one of its most prominent leaders, Abdul Jabar al Oqaidi.

Some activists and rebel groups have criticized the U.S. decision against Nusra Front and have called for demonstrations on Friday in solidarity with the organization.

“Jabhat to Nusra is one of the groups most strongly fight against the regime,” he told Reuters from Damascus an activist of the Youth Union of Syria, Samir al Shami. “Never have I seen any attack which may be considered a violation of civil rights and never have provided evidence about it,” he added.

Meanwhile, Abu Musaab Qitada, the rebel military council in Damascus, said that militants of the Front to Nusra “have helped defend our children and sacrificed their lives for our families.”

In a very different sense, Hama activist held – on condition of anonymity for security reasons – the U.S. decision, but warned that such groups are gaining ground in the absence of other forms of military aid truly effective.

“I do not think most Syrians support these radical groups,” he said. “We are a conservative people, but we are not extremists,” he assured. “I think the Syrians have accepted it because they feel they have no choice,” he warned.