Sony Xperia Sola will Monitor Touch Screen with Gloves: Sony has announced the update of its ‘smartphone’ Xperia Sola to Android Ice Cream Sandwich will allow users to use the terminal with gloves, just before the onset of winter. When launched the terminal, and control the interface allowed without touching the screen and an extension of this feature will allow the use with gloves. 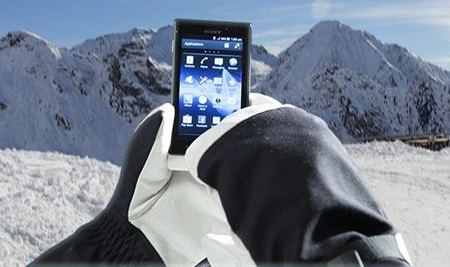 The ‘smartphone’ generation have screens getting better, with more brightness and definition. However, most suffer from not allow use of the device in case the user’s skin is covered with gloves or garments.

That meant that users have to give these winter outerwear to use your mobile, or resort to gloves that do not cover the fingers or have special parts to allow mobile interaction.

Nokia is one of the first companies that has introduced a new technology in the Lumia 920 screen that allows interaction with gloves. Following this path, Sony has made one of its smartphones, the Xperia Sola, offer the same possibility. Thus, gloves and touch screen phone will no longer incompatible.

Sony has announced that the update to Ice Cream Sandwich for Xperia preparing Sola be introduced a feature that allows the device to use with gloves. This function is activated as standard and is named Glove Mode.

The company explained that this is possible by a change in the function of the phone that allowed its control without going to touch the screen. That role seemed to allow interaction as “magically” has expanded to offer the ability to interact with gloves.

The company has shown a video in which one can see that the result is very good, getting the device to have a really quick reaction to the introduction of commands and commands via touch interaction.