Facebook Scam in 2011 Appeared Again on FB: Last year, in the form of news hoax scam saying that Facebook released a membership system at a cost of USD 9.99 / month had horrendous its users. Having gone and long ago, it re-emerged hoax.
Some Facebook users are getting 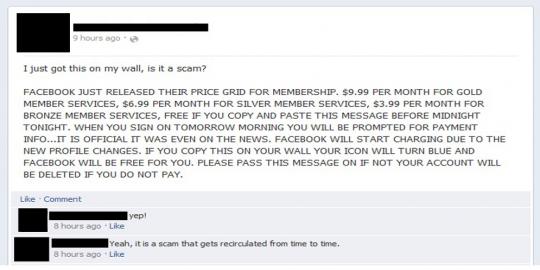 this morning reported that on their wall there is a notification with the exact same script as last erupted in 2011. For some Facebook users who do not keep abreast of the news, it will feel afraid because there is the threat that Facebook will delete your account if they do not pay.

In the message tells us that every Facebook user is obliged to pay a specified sum of money. There are 3 levels of memberships such as Gold, Silver and Bronze. This scam also explained that after the user pays ‘fee’ membership, then the Facebook icon turns blue.

Indeed, not all Facebook users receive notification scam, but if you see a notice like this, it is advisable to ignore or delete them. This is an example of his writing.

New Amazon Tablet Does not have FCC approval for Sale