Smartphone+Tablet Asus Unveils Its Padfone 2: Asus is still growing in this concept which is in the form of an Android smartphone that fits into a touchpad.

Despite the relative success very first name Padfone, Asus has officially unveil its successor, the Padfone 2. The idea remains the same: it is an Android smartphone which slides into a touch pad, activated only when combined with smartphone.

Once connected, the mobile connection sharing its data and its display or use phone applications and content on the tablet. In addition to its role as additional screen 10 inches, the tablet also acts as a second battery. 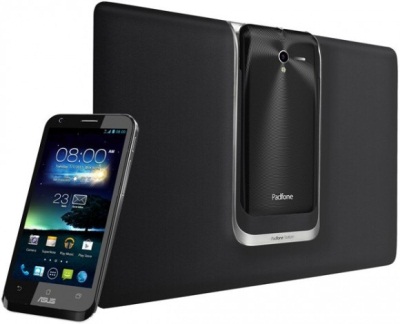 The first Padfone was disappointed with the specifications and the price was too high. His little brother he corrects these errors? Configuration side, Asus has made efforts. The Android smartphone is equipped with four 4.7-inch screen, a quad-core processor Qualcomm and 2GB of RAM. It is 4G. It features a 12 megapixel camera that can capture 720p videos.

Two versions are available: one shipping 32 GB of storage memory and the other 64 GB Asus also offers 50GB of cloud space.

Unfortunately, the prices remain high. The smartphone version associated with the 32 GB tablet will be charged 799 euros. The rate is 899 euros for the 64 GB

The question is whether there is a market for this concept. The idea makes sense when we know that the operators offer a share of 3G packages and other packages dedicated to tablets, Asus offers an innovative device so that a single subscription enough. In fact, the smartphone plays the role of “brain” and stands out as being the engine of both devices.

But operators are starting to offer more packages for smartphones to share the quota of data with a tablet. Thus making the idea of Asus less relevant.

In addition, consumers are willing to put all their eggs in one basket can only be used with a tablet with smartphone and thus would be useless in the event of a change of phone? Especially since the Padfone tablet 2 is not compatible with the Padfone smartphone 1 …

The success of tablets or tabphone these hybrid devices like the Galaxy Note also leaden prospects Padfone products as they fill almost alone duplicate it even if the screen is smaller.

These factors have led some to abandon such products. Motorola has announced that it would stop its concept PC dock for smartphone. Introduced at CES 2011, the concept associated Atrix 4G Android smartphone with a “laptop dock,” a dedicated laptop that receives the terminal plug & play through a dock battery.

In a statement, the U.S. manufacturer, now a subsidiary of Google, explains that “the adoption was not strong enough to justify the resources needed to develop future products.“