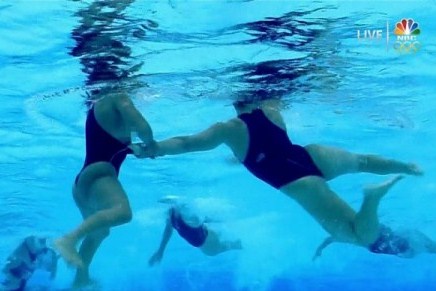 Water polo looks tough enough from above the water. Diving into the depths of the pool reveals a chaotic scene of ferocity. Kicking, grabbing, pulling, punching, struggling it’s all legal underwater. Players thrive on it. As NBC showed on Wednesday, it might be most dangerous to camera operators.

NBC has not yet released a statement regarding the nipple slip, but this isn’t the first time that viewers have complained about the network’s Olympic coverage. Olympic enthusiasts were angered when NBC spoiled Missy Franklin’s win in the 100-meter backstroke by airing a Today promo.

The moment, noticed by the folks over at Deadspin, is fast enough that only someone who has never seen a naked breast before could ever really be that intrigued. And, in the high speed Internet age, I’m not sure there’s anyone left like that. But, still, live TV nipples are always fun so we picked up Deadspin’s lead and found the actual clip.

NBC quickly apologized for that mishap. We wonder what they’ll have to say regarding the nipple slip.