CNBLUE Jonghyun Share Friendship Stories with SHINee Jonghyun: The close friendship between SHINee Jonghyun and Jonghyun CNBLUE belakngan attracted much attention because in addition to having the same name, many do not think if they turned out to be best friends. 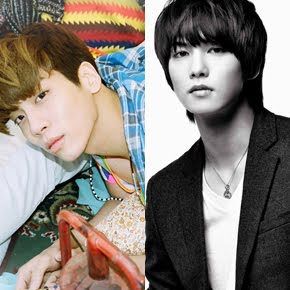 In an interview, Jonghyun CNBLUE told of a birthday present he received from SHINee Jonghyun.

Interviewer: You seem very close to SHINee Jonghyun? I saw it happen “Diablo 3” on twitter. haha

Jonghyun CNBLUE: Ahhh, (while laughing and tapping his forehead) manager said on the eve of my birthday that Jonghyun to tweet something funny to me so I will call him. He [SHINee’s Jonghyun] said if he had bought ‘Diablo 3’ for my birthday and it will give me the next day.

At first, I thought he would actually do it so I thanked him and said that recently I’ve stopped playing the game for being too busy with my job. So I then thought, what should I do with the prize.

However, in the end when I opened the gift package, it turns out it is a glutinous rice cake.

Interviewer: What is the poster Jonghyun gift wrapping?

Jonghyun CNBLUE: Yeah, then I asked him if he was joking with me and wanted me to rip the wrapping gifts is a poster that was himself. But even so, he [SHINee’s Jonghyun] actually buy the gift online and give it to me.

Interviewer: Are you two close because it has the same name?

CNBLUE Jonghyun: I think it should be the main reason. But then I knew that he was a friend of mine. We have often met each other during a gig schedule, but still not really close. After that my friend called and asked if we [me & SHINee Jonghyun] close friends.

Because I was a little awkward to say if we were close friends, so I said ‘we are not too close’. But after that, Jonghyun immediately call me and yell, ‘Well, we’re not close friends?’ Then I’d say, ‘Ah, okay … we’ve become close friends.’ And then he came back saying, “It’s okay, we also did not so close! “.

He (SHINee Jonghyun) is really cute and playful, but when he sang, he would do it in earnest. We became closer when you’re talking about music because he had previously been in a band before the debut as a member of SHINee.