Microsoft Launches App Store For Office: Microsoft opens its Office Store for companies, users and developers in beta. From this store , you can download popular applications such as LinkedIn and Twitter, which integrate into your new ‘suite’ of office, also still in trial version.

In the Microsoft Office Store the user can find all kinds of applications for Office and Sharepoint. The process to follow is basically recorded in the Microsoft staff, and from that point on, any application that the user install will be associated with your account. 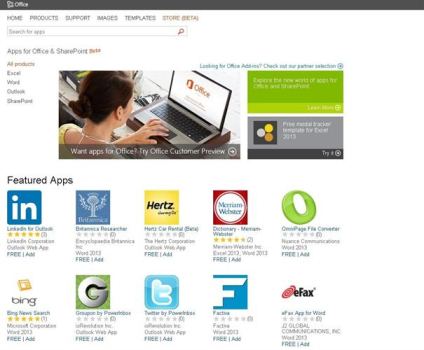 Thus, every application is downloaded the user will be available at any time from any device using Office.

One of the advantages that the app store in question is that nothing is installed on the machine alone. That means that everything is recorded on the server and all user content that is downloaded will accompany you at any time from the My Apps section of the Office Store, either from your terminal, computer or other device.

Integration, simplicity and opportunity to develop are the three reasons for creating the Office Store, says one of its creators, Vivek Narasimhan. Since its ‘post’ in the MSDN blog of the company explains that he and his colleagues have created the store “so that (users) to integrate the best of the web with the powerful features of Office and SharePoint.”

One of the main areas where Microsoft has thought to launch its app store have been businesses. Proof of this is that, as a complement to the Office Store, a mechanism for internal distribution in SharePoint, called the Application Catalog, which enables companies to build internal applications to later distributorships employees of the company.

The other groups, apart from the user and the company, which targets Microsoft’s new store are the developers, as they will have the opportunity to improve and create web applications that become part of the catalog of the Office Store.

Meanwhile, applications that are integrated into the web platform will have multiple ways of Office, as these can be inserted into line as task panes within documents, or may become part of the templates. Also, be ready to run when documents are sent by mail, the Outlook also renovated, and the ‘apps’ will be activated automatically within e-mails or calendar appointments.

Another of the platforms on which applications will be inserted SharePoint, where everything is an application. So in the user’s site appear clustered applications in a number of widgets such as documents or templates. But if you want Internet users to develop an application for this site have to use Access 2013 Preview which allows advanced users to create their own applications to SharePoint easily.