Naomi Campbell and Kate Moss Golden Girls of Olympics: The British supermodel collaborating with top designers in the country for the September issue of Vogue, it’s sure to be the most anticipated and glamorous posed of all time. Midas Touch is part of the closing ceremony of the Olympic Games in London.What a way to close the event! 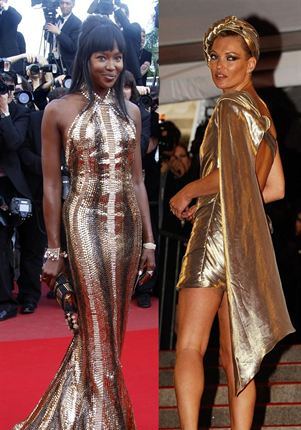 Apparently commissioned to conduct a Vogue photo shoot full of brightness and light as a tribute to the closure of the London Olympic Games and the result is a magnificent history of fashion with flashing gold pieces created by designers like Alexander McQueen, Burberry and Christopher Kane.

The perfect muses to wear such designs could not be other than Kate Moss, Naomi Campbell, Georgia May Jagger, Karen Elson, Stella Tennant, Lily Cole, Lily Donaldson and Jourdan Dunn.

Among so many beautiful women there was only room for an attractive young man Vogue.com blogger, David Gandy.

The photographer in charge of the session was Nick Knight and stylist who has done work as maintained images, Lucinda Chambers.