Zhang Ziyi Scandal With Bo Xilai: Actress Zhang Ziyi (章子怡) has allegedly been barred from leaving China after it was determined that she had sex with former top government official Bo Xilai (薄熙来) more than 10 times.

Zhang is said to be under investigation by the Bo Xilai government and police investigation team, according to the US registered Chinese-language website Boxun. 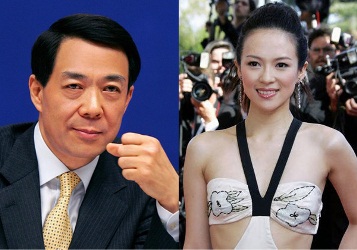 The news has been carried by Apple Daily and other papers in Taiwan, but not in the Chinese mainland.

The pair’s sexual relationship was arranged by Bo’s associate, the 41-year-old billionaire Xu Ming (徐明), who is founder and chairman of Dalian Shide Group.

According to various sources, Xu confessed that he paid Zhang 6 million yuan ($946,000) in 2007, after sleeping with her for the first time.

The two then had several other “bedroom deals” before Xu arranged for Zhang to offer special services to Bo in the same year, for 10 million yuan.

Sources said Zhang is famed in entertainment circles for obtaining money, jewelry and real estate from sleeping with the rich.

She has had up to five or six billionaire boyfriends at the same time, but only has one “formal boyfriend” in public.

The real reason could be that she is being investigated for her connection to Bo Xilai, Xu and her work as a prostitute.

Previously, Ziyi has been accused of witholding charity funds for the Sichuan earthquake and has often been connected with rich and powerful men, with whom she is supposed to have prostituted herself.