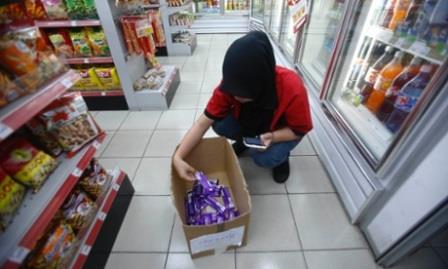 Cadbury chocolates are taken off the shelves in Shah Alam, outside Kuala Lumpur, after pig DNA was found during tests for non-halal substances. Photograph: Samsul Said/Reuters

Enraged Muslims in Malaysia have called for a holy war or Jihad to be waged on Cadbury after traces of pig DNA were picked up in their chocolates. As a result of the complaint, the company has pulled two of its products from Malaysian shop shelves.

A group of more than 20 Muslim organizations have condemned UK confectionary company Cadbury, saying “it has crossed the line.”

“They have betrayed us Muslims by putting ‘haram’ elements through the foods we consume in our body, to weaken us Muslims,” said Abu Bakar Yahya, chief of Muslim group, Perkasa Selangor, to press at a conference on Tuesday in Kuala Lumpur quoted by Malaymailonline.

Some of the Muslim organizations even called for a Jihad to be declared against Cadbury for its “betrayal.”

The Malaysian Health Ministry confirmed on Tuesday that traces of porcine DNA had been picked up in a routine check for non-halal substances in Cadbury products. According to Islamic law, Muslims cannot consume pork or any products derived from it.

Cadbury’s Malaysia, which is part of the British multinational (owned by Mondelēz International), said that it was pulling two chocolate bars from the shelves in line with the discovery – Cadbury Dairy Milk hazelnut and Cadbury Dairy Milk roast almond.

“Ensuring that all our products made here in Malaysia are halal is something we take very seriously,” it said in a Facebook posting.

Malaysian Health Minister Subramaniam Sathasivam told press that Cadbury was now cooperating with the Ministry and sharing samples to ascertain where the porcine DNA came from.

“We want to know how the product became contaminated with pig DNA. The health ministry will also do additional tests,” said Subramaniam.

Cadbury is the world’s second largest confectionery brand after Wrigley’s.