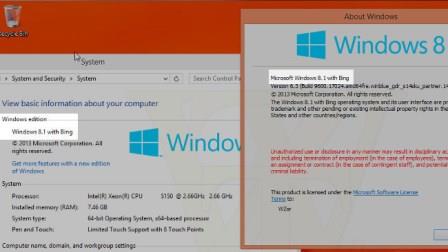 Before the presentation of Windows 8.1 Update 1 there were many leaked builds and rumors. Between all this hodgepodge, someone revealed the existence of Windows with Bing, a new mode of Windows that we didn’t know anything beyond that would be an effort to reduce the operating system.

Today Microsoft has officially announced the existence of Windows 8.1 with Bing. The concept is simple: a Windows with Bing as a search engine by default in Internet Explorer – engine which, of course, you can change later.

This version will only be accessible to manufacturers who want to include it in their devices. Users can not purchase licenses separately.

In this way, Redmond aim to lower the price of licenses for manufacturers and gain ground with cheap devices. It is also a way to introduce users to the Windows ecosystem better: in fact, some of the cheap tablets that can be sold would come with Office or included subscriptions to Office 365.

Windows with Bing would be part of the efforts of Microsoft by lowering prices of their licenses, including those of Windows Phone. The purpose is to get more users of Windows 7 upgrade Windows 8.1.

Not yet defined the differences that will have this version (Windows already has all amenities of Bing). Some speculate that this version could have ads, it seems unlikely–there has been no reliable information on that.

The clearest bet would be that Microsoft will take an approach “to the Google”, but this has yet to define how to monetize their services on the Internet.

In other words: Microsoft is preparing something and no one knows what, but looks set to change one of the most rooted in Redmond paradigms, charging for licenses.

iTunes 11 A New Design and Better Integration with iCloud