Never Miss The Best Looks From Red Carpet at 67th International Cannes Film Festival 2014: Cannes these days is a non-stop. If above projection , red carpet on one side, the other press conference. Our celebrities do not stop to rest , let alone when you have a few hours to change ‘ outfit ‘ , because all the world is watching what design will look. 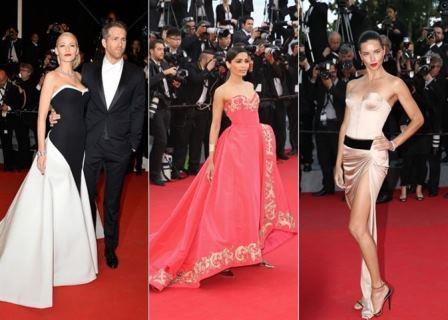 The red carpet at the 67th International Cannes Film Festival 2014 has witnessed the best looks that actors and actresses have worn for this occasion.

From tulle chantillis , lace, mermaid or princess cuts , the Hollywood actresses have worn with elegance models. Among the most successful actresses met Nicole Kidman , who sported a spectacular first day steamy Giorgio Armani Prive gown with strapless neckline , decorated in blue and silver shades with rhinestones ; actress Hilary Swank , who dazzled on the red carpet in Atelier Versace dress , satin pearl color, one sleeve, pleated in the abdominal area accentuating the spectacular figure of the star of Million Dollar Baby.

Other actress who dazzled on the red carpet was the veteran and Jane Fonda, who despite age, wore a figure in a stunning Elie Saab dress in red , with rhinestones ornaments.

The beading was also present in the design of the dress Zoe Saldana wore the second day of the festival. The actress wore a Jason Wu dress , baroque style in black and green.

Frida Pinto has not left anyone indifferent at this year’s festival. The first few days the Indian model appeared on the red carpet with a spectacular design by Michael Kors, with vee neck and feather skirt adorned with rhinestones. 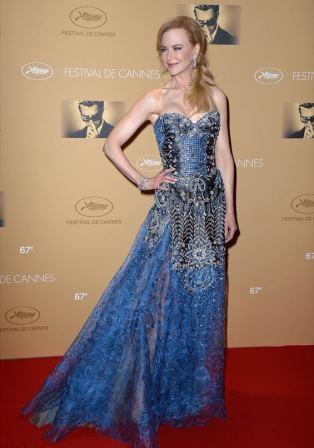 The touch of color made ​​her the fifth day of the festival. The actress appeared in a dress designed by Oscar de la Renta in Coral tone with golden ornaments.

Which has not left anyone indifferent has been the model Adriana Lima , who as spectacular as ever arrived on the red carpet with a pattern in shades of nude and black , creating a very sexy Alexandre Vauthier which combined with Guiseppe Zanotti sandals and Chopard jewelry.

Among the most spectacular find the actress Blake Lively who arrived with her husband Ryan Reynolds, who wore a Gucci Premiere design a dress in black and white with princess cut skirt. Which left us with an open mouth was actress Cate Blanchet, who appeared at the premiere of How to Train Your Dragon 2 with a Givenchy dress made ​​for flake- bodice in bright colors and black skirt.

The amazing thing about this dress was in the back, fitted bodice and waist to shoulders , revealing the entire back.

The Spanish accent made ​​her the model Judith Masco, which had long not seen on a red carpet. Judith wore for the occasion a design Zac Posen mermaid cut gown in black color and heart -shaped neckline.

Undoubtedly, the International Cannes Film Festival 2014 is a clear example of the best of the runways around the world with a film models.