Nokia X A110 Android Smartphone Price $110: The rumored of low-cost Nokia  Android smartphone, is expected later this month but price has already been popped up on an Vietnamese Web site.

It is expected that Nokia will launch a low-cost Android smartphone by the end of this month , however little is known about the technical specifications and much less about its market price. But now there is new indications in Vietnam where the device was presented with an approximate value of $ 110 site.

The rumors about this Android Nokia (Nokia Normandy) smartphone circulating the internet a few months ago . According to some the device will not be able to access Google Play , and instead access the services created by Nokia and Microsoft as the Here Maps and Mix Radio. Nokia will also provide its own application store where you will attend some of the most popular applications for Android . 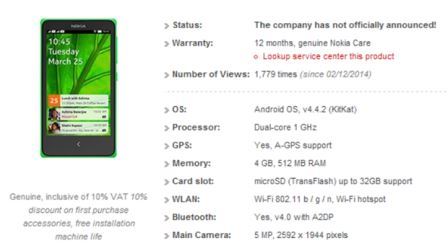 Another news coming withstand further closer to the release of the Nokia Normandy is the latest amendment of the official pages on Twitter and Facebook Nokia , whose colors were changed to emerald green color of the brand Google Android software .

A Nokia representative said today that its color changes is a “ teaser of things to come ” , further reinforcing the idea that the Nokia device with Android system is about to be launched .

The press conference Nokia is already scheduled for 25th February during the Mobile World Conference , which is the most likely time for the presentation of this new low-cost Android Nokia terminal.