Bom and Lee Hi Ruined Christmas by Mariah Carey Hit ? Korean netizen and international netizen both decry all words are Christmas songs that just came out of Bom and Lee Hi. 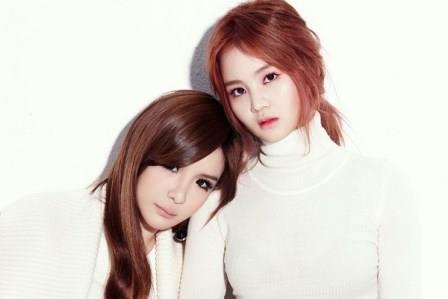 Yesterday 21/12 , the duo BH ( Park Bom & Lee Hi ) has officially ” Drop Chain ” MV For  All I Want Christmas Is You. As many fans know, music production YG ‘s latest remake of the hit song World Christmas All I Want For Christmas Is You by Mariah Carey. YG spice Jazz and Pop hits turn into a completely new song .

However, it seems All I Want For Christmas Is You by BH has failed conquest majority of Kpop fans .

On Nate , not less Korean netizen said that BH has ruined Christmas songs of Mariah Carey . Allkpop on , the international pop fans also expressed sympathy with the Korean netizens .

Some Korean netizens opinions on Nate :

“Maybe because I ‘ve put too many expectations , but I do not like this song … I never thought bomb was a bad singer but I think she’s really pretty bad at singing this song . Maybe because she is not with it … Hi does singing much better ” – 282 votes agreed , 25 disagreed vote .

” It’s funny when a page article about foreign media complained about bombs and destroyed Hi Mariah Carey songs like Nate has not been published . Was very embarrassed when I read that article ” – 29 votes agree , disagree 3 vote .

” I am extremely disappointed with this song . Both too bad . Failure to satisfy this song at all. They are trying too hard to sing like that ” – 19 votes agree , disagree 4 vote .

” I was so looking forward to this song but it’s too bad … Hi Lee Bom sing well but part of it … a little too far already. Songs of Christmas should be expressed simply stop ” – 18 votes agree , disagree 3 vote .

” I was surprised when they can choose a great song and express it so so so bad . Hear Park Bom sang unstable too bad at all … ” – 16 votes agree , 0 vote not concurred .

” As if they choose two amateur singers sing a song and make this go Pop . Worst Christmas song I ‘ve ever heard ” – 15 votes agree , disagree 3 vote .

Allkpop on , the majority of international pop fans also share the same opinion with Korean netizens :

michaelbom : ” I really do not think Bom shows well in this song because her pronunciation … ” .