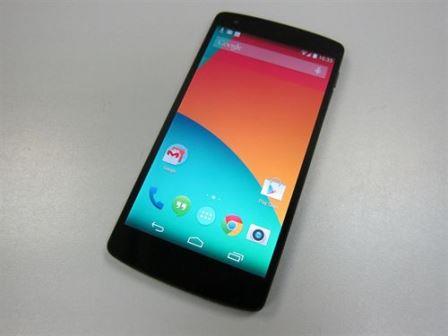 Nexus 5 Review: The Nexus range again offering storm the smartphones market with its irresistible proposal: high – end features with a few exceptions such as the battery – to mid-range price. For $450 to $550, depending on storage capacity , have a terminal at the forefront in terms of power and ‘ software ‘ that convinces anyone.

Nexus 5 was offered for sale by Google on October 31 via Google Play and the first buyers are already getting. Those who do not will have to wait  few weeks in new orders and will have to see if the units during or drought prevailing in the company store finder, as happened with the Nexus 4.

Surely it will not be easy to get with the new Google terminal manufactured by LG. The key to such rapid sales is a mid-range price for a high -end features that make it a powerful terminal that offers a great user experience.

In terms of design , this is reminiscent of the previous generation , but it has changed back by plastic glass with rubber . It weighs 130 grams and measures 137.8 x 8.59 x 69.17 mm. Its power and volume buttons are ceramic and integrate well into the housing. The feeling is very good , is compact , solid, well finished and light.

The device manufactured by LG and Google has a screen Gorilla Glass Corning Glass 3 4.95 inch Full HD (1920×1080 pixels , with a density of 445 dots per inch) . It offers a great picture and there is little room for the edges in the front of the terminal.

Monta Snapdragon processor 2.3GHz 800 , 2 GB of RAM , 16 or 32GB of storage and Android KitKat 4.4 operating system  . The experience is 100 % Google , so that all applications and services are search engine and there are no shortcuts and extra features that incorporate other manufacturers.

Among the changes in the new version of Android will include the greater importance of Google Now , the complete and useful assistant to the company that is now on your desktop.

In short we can say that is a very affordable Android experience and complete. It is completely fluid and stable at the best of ‘ software ‘ in the Android ecosystem . Of course , beyond the operating system running intensive applications such as video games quickly and fluently.

As for some of its features connectivity / mobility , has Bluetooth 4.0, 4G/LTE and dual-band wireless , so you are prepared for the new high-speed connections .

As for the sound , but has two output grids , in reality it is a mono speaker , so in this sense , is far behind other handsets such as the HTC One , which has a powerful stereo speakers on your part front , which allows listening to music or watching videos at home without having to go looking for earphones or a speaker.

One of the drawbacks of the Nexus 5 also was the Achilles heel of his predecessor : The rear camera is 8 MP with optical image stabilization ( has 1.3 in the front) . Although it is somewhat below the terminal as the LG G2 or Xperia Z1 has recurred distance and quality now doing very closely. It is striking that has earned at the time of collecting light and also now incorporates a HDR + enhanced mode that offers very good results fairly quickly. It also has other functions such as pan or Photo Sphere .

One of the negative terminal of the battery is 2300 mAh . Although it is very good energy management , could have used more capacity, and it just gives all-day use and as many as your own LG G2 have been stepping up and have risen to 3000 mAh , offering several hours of use. In any case , with normal use , the duration is 12 to 15 hours, with what is acceptable .

Beyond minor gripes , if there is something you can criticize the Nexus 5 is that no more units for sale . By design, quality and power terminal is recommended for anyone who wants to spend 400 euros on a terminal, since it offers more or less the same as many high-end competition for $ 400 less so. It is available in black and white with black front in both cases. It costs $ 349 for the 16GB version and 399 for the 32GB version .