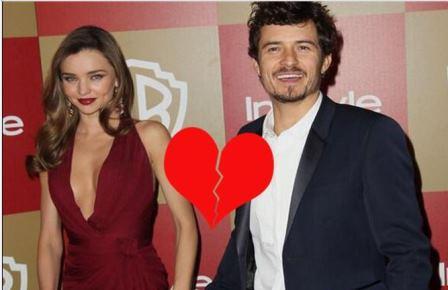 One of the most attractive couples and most stable of Hollywood Divorce. After three years of marriage the couple has decided to start a new life alone.

The news has been confirmed by the actor’s rep daily E! News: ” Orlando Bloom and Miranda Keer have taken the decision to split amicably ” and told the media.

It also states : ” Despite the end of marriage , they are still keeping much care for each other and respect as parents of son Flynn “.

The youngest of the couple was born on January 6, 2011 , filling the happiness of a marriage that seemed unbreakable.

The work of the actor busy schedules Pirates of the Caribbean and the beautiful model may have become a pothole that the couple has not been able to overcome .

After six years of love , separation becomes official after his last public appearance on 19 September in Broadway , where the player participates in the play Romeo and Juliet.

A divorce expected nothing from which the protagonists do not even have wanted to pronounce . The model has decided to focus on work to overcome this marital breakdown.